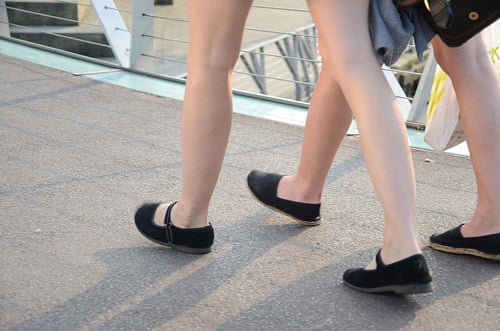 And finally… Walking emerges as answer to panic buying of fuel

The threat of a fuel strike looms. The Government advised us to fill up our tanks. But it may just be time for the UK to begin properly exercising the two long things attached to our waist (technically known as legs) in an attempt to save what fuel we have rather than whipping up a panic buying frenzy.

The majority of us were graced with the ability to walk under our own free will. So, tying in with the splendid March weather we’ve witnessed of late, surely there’s no better time to ramble, stroll or, if you must demonstrate true purpose, march to as many destinations over the coming weeks as possible.

Before the words “fuel strike” had even slipped out of David Cameron’s Cornish pasty-crumbed lips, members of the public began flocking to petrol stations to panic-buy fuel for their vehicles.

An Asda filling station in Lincoln announced yesterday that its pumps had already run dry, forcing it to temporarily close its doors to petrol-thirsty customers.

And it wasn’t the only one. Memories of the strikes in 2000 re-enter our consciousness, as fuel reserves at filling stations in Staffordshire, Merseyside and Shropshire, as well as countless other forecourts across the country, have also been exhausted, with the demand for petrol rising 172% yesterday, and diesel by 77%, according to the Retail Motor Industry Federation.

But instead of repeating the antics of 12 years ago and rushing to the nearest station to stock up on fuel, Blue & Green Tomorrow suggests using your feet to get where you want to be.

Although Walk to Work Week and Walk to School Week aren’t until May, reaching for your comfortable shoes instead of your car keys, might not be such a bad idea.

You won’t only be helping to reduce the unnecessary strains placed on filling stations, but you’ll also be playing your part in attempting the ever-increasing greenhouse gases emitted from UK transport. Oh, and getting healthier at the same time.

Our electric vehicle market is dwindling in comparison with other countries, so walking emerges as the best option out of the lot.

For the record, any kind of panic is unnecessary as of yet. Fuel unions have to give at least seven days’ notice of any planned strike, and no date has been decided thus far. Unions have also ruled out strike action over Easter.

We at Blue & Green Tomorrow recognise that conventional fuels are well and truly the most widely used. But we also realise that petrol and diesel are finite resources, which is why we must be finding new ways to power our vehicles, whilst also reducing the environmental impact of them.

Our latest in-depth report, The Rise of Renewable Energy examines the state of the clean power industry, whilst also suggesting ways to make a difference within the sector.

Good Energy, the UK’s only 100% renewable electricity supplier, is a great place to start if you want to become a clean power advocate.