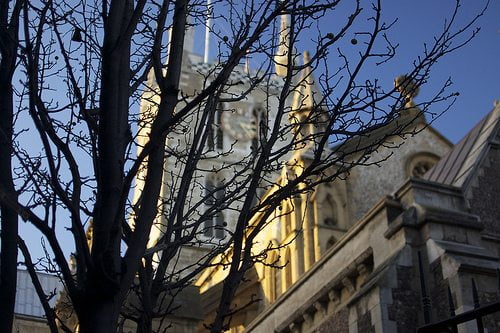 The Church of England will consider whether to completely divest from fossil fuels, after the diocese of Southwark passed a resolution backing such a move.

The issue will be passed onto the General Synod, the legislative body that governs the whole church, but this process could take a couple of years.

A spokesperson for the church told Blue & Green Tomorrow that as it stands, fossil fuels were “not excluded” by its ethical investment criteria, though they are “up for review”.

At the regional synod in Southwark on Wednesday, April Alexander of the church’s investment arm, the Church Commissioners, said the church had reduced its expose to fossil fuels by 62% since 2010.

This represents a significant shift in its £8 billion of assets, given it has historically held large investments in the likes of oil giants Shell and BP.

Mark Letcher, vice-chair of Christian environmental group Operation Noah, said the divestment appears to have been done on financial grounds, rather than for ethical reasons.

However, he said, “It is Operation Noah’s view that there is a strong ethical and theological argument for complete and rapid divestment from this sector.

“Existing reserves of fossil fuels far exceed those which can be burned without the resulting pollution triggering catastrophic changes in the climate system. Yet oil, gas, and coal companies in which churches are invested continue to spend billions of dollars per year on developing new reserves of oil, coal and gas.

“There is no evidence to suggest that these companies are seeking to change their position which is why we are calling on the church to divest.”

A major Norwegian pension fund, Storebrand, recently revealed it would be divesting from 19 fossil fuel firms, including coal and tar sands, because these stocks will be “worthless financially” in the future.

Religion tends to square well with environmental protection and ethical investment. Author and environmentalist Bill McKibben, whose 350.org group is leading the divestment movement, is a devout Christian; the Religious Society of Friends (the Quakers) are widely credited with setting the ethical investment ball rolling in the 19th century; and many Muslim investors are forced to invest and bank using ethical criteria because of sharia law – Islam’s legal system.

Operation Noah published a document called The Ash Wednesday Declaration in 2012, written by its theology thinktank, which argued that caring for the environment and being concerned about climate change are both fundamental to Christianity, and indeed the Church of England’s core mission.

Letcher added, “At present the church risks leaving itself in a ‘lose-lose’ situation. If oil, gas and coal companies are allowed to develop new reserves of fossil fuels, the church may continue to make a return in the short-term but only at the cost of triggering uncontrolled changes in the climate system, something all denominations have publicly committed to prevent.

“However, if governments uphold their commitment to limit warming to 2C then these new reserves can never be realised and their value will fall leaving the church with ‘stranded assets’. This is why we are calling on churches of all denominations to divest from fossil fuels and to actively invest in clean alternatives.”

Operation Noah said it hopes the Southwark resolution could pave the way for some of the other 43 dioceses in England to follow suit in calling for fossil fuel divestment.