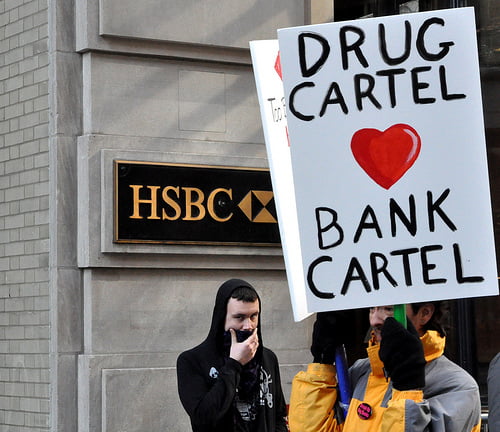 A judge is considering rejecting a deal that would open HSBC up to criminal prosecution in court, prison for executives, massive fines and no freedom to operate in the US.

The bank was fined £1.2 billion in December over claims that it was laundering money for terrorists and drug lords in Mexico, and entered into a deferred prosecution agreement (DPA) in order to avoid prosecution.

However, the judge presiding over the case has threatened to throw out the deal, which would force the bank to face criminal charges similar to those faced by BP in relation to the Deepwater Horizon disaster.

Campaign groups had said the US justice department’s fine would not work, and that top executives needed to be imprisoned instead.

“If you get caught with your hand in the till you go to jail, but if you’re a big bank and you’re caught breaking the law, it seems that all that happens is you’re fined and told you’ll go to jail if you do it again”, said Global Witness campaigner Rosie Sharpe in December.

The US Senate defined HSBC’s money laundering culture as “pervasively polluted”, especially with regards to its links with Mexican drug lords who managed to move billion of dollars in the US.

Stuart Gulliver, CEO at HSBC, said he was “sorry” and told the banking commission, “We bought a bank in Mexico, we bought cheaply because it was in distress.

“We ourselves were too slow to put in place anti-money-laundering systems that were up to the standards required today.”

The money laundering scandal is not the only one that HSBC has become embroiled in. Global Witness, and previously Greenpeace, denounced the involvement of the bank in deforestation activities in south-east Asia. Meanwhile, Friends of the Earth recently claimed that along with Barclays and investment firm Schroders, HSBC was funding a palm oil company in Uganda that was involved in land grabbing.