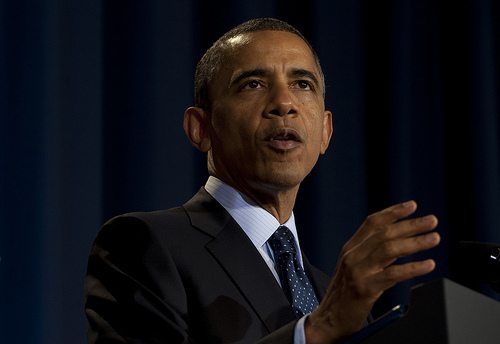 US president Barack Obama has acknowledged the warnings of climate scientists and financial analysts that the majority of known fossil fuel reserves must never be used if climate change is to be curbed.

In an interview conducted several weeks ago, to be aired in Monday’s episode of Showtime’s climate series, Years of Living Dangerously in the US and previewed in the New York Times, Obama was asked if he agreed that no more than one-third of proven reserves of fossil fuels can be consumed before 2050.

“Science is science”, he said.

“We’re not going to be able to burn it all. Over the course of the next several decades, we’re going to have to build a ramp from how we currently use energy to where we need to use energy.

“And we’re not going to suddenly turn off a switch and suddenly we’re no longer using fossil fuels, but we have to use this time wisely, so that you have a tapering off of fossil fuels replaced by clean energy sources that are not releasing carbon.”

The publication of the interview comes shortly after the unveiling of new US Environmental Protection Agency (EPA) rules that aim to cut pollution from power plants by 30% by 2030.

It is hoped the guidelines will boost investment in the US renewable energy industry, while also bringing net climate and health benefits worth up to $82 billion (£48 billion).

Obama added that helping the market to cut carbon emissions may save trillions of dollars in the long run.

“If there’s one thing I would like to see, it’d be for us to be able to price the cost of carbon emissions”, he said.

“I still believe, though, that the more we can show the price of inaction — that billions and potentially trillions of dollars are going to be lost because we do not do something about it — ultimately leads us to be able to say, ‘Let’s go ahead and help the marketplace discourage this kind of activity.’”

In the interview, Obama also revealed that he now gets frequent briefings on environmental issues from science adviser John Holdren, much like his daily security briefing from the intelligence community.

One major concern, the president says, is where these issues overlap. Obama admits he is worried about the impact climate change will have on global security.

“When you start seeing how these shifts can displace people — entire countries can be finding themselves unable to feed themselves and the potential incidence of conflict that arises out of that — that gets your attention”, he said.

“[These countries] don’t have a lot of margin for error, and that has national security implications.

“When people are hungry, when people are displaced, when there are a lot of young people, particularly young men, who are drifting without prospects for the future, the fertility of the soil for terrorism ends up being significant. And it can have an impact on us.”

According to a recent report from a panel of former American generals and admirals, climate change is already acting as a catalyst for conflict and poses a serious risk to security.

The Centre for Naval Analysis Corporation’s (CNA) Military Advisory Board’s analysis suggests that droughts caused by warming in the Middle East and Africa are leading to conflicts over food and water, exacerbating pre-existing tensions and creating an environment in which extremism and revolutionary influences can prosper.