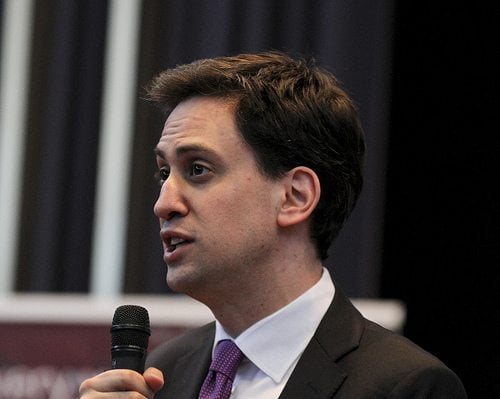 Labour leader Ed Miliband has said that the flooding crisis should be seen as a wakeup call for Britain to act on climate change, while criticising prime minister David Cameron for creating a “false economy” over the government’s flood aid measures.

The leader of the opposition hit out at the prime minister, who recently said that money would be “no object” in helping those affected by the recent storms, bad weather and flooding. Miliband said that Cameron wasn’t going far enough to help future victims of the floods.

Miliband made the comments at an event in Leeds, where he was talking to an audience about party reforms. He said, “The really interesting thing about Cameron’s infamous money is no object – I think that’s a surprising thing for him to have said – is that he was saying it about the clean up, but he wasn’t saying it about investment in flood defences […] that is a totally false economy”.

He added, “The idea that you just wait for everything to go wrong and wait for the problems to arise […] and then clean up the mess makes no sense at all”.

Cameron has been criticised in recent weeks over the handling of the floods, particularly for enforcing deep cuts to the Environment Agency’s budgets and staffing. Some climate campaign groups have even called upon the prime minister to sack the environment secretary Owen Paterson, who they call a climate change sceptic.

Miliband said, “These floods and storms should be a wakeup call for us. I think it is a national security issue – John Kerry on the same day went much further in saying that climate change is a weapon of mass destruction […] and he’s right about that, and so we’ve got to get this as a country”.

He said climate change was a “generational struggle”, adding that there is a “real make or break issue about the kind of climate we pass on to the next generation and the generation after that”.