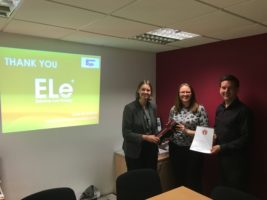 Extreme Low Energy has been rewarded at the Merseyside Innovation Awards for their “technological breakthrough” in energy. The MIAs recognise companies and individuals who use creativity to increase growth and profitability, and contribute towards the UK’s economic development. Extreme Low Energy has created an energy system that powers more devices, but lowers carbon emissions.

Extreme Low Energy is the brainchild of Mark Buchanan. Having previously identified that Ethernet cables (which carry internet signals to computers) could be used to transfer power and charge devices directly, he has now created a system which can deliver direct current (DC) electricity to an entire office building, removing the inefficient conversion from alternating current (AC).

Caroline Clayton, ELe Operations Director, said: “The simplest way to explain it that every laptop or desktop computer has a small black box on the power cable. That box turns the AC electricity from the mains into DC electricity which the device then uses. This conversion process is inefficient and further energy is lost as heat during the transformation.

“Our system, which can be retrofitted to existing offices or incorporated into new builds, delivers power in two ways. It can deliver DC electricity without conversion direct from a renewable power source, such as a wind turbine or solar PV panel, to a mains system or battery storage. Alternatively we can set up a transformer where the grid supply comes into the building to convert the AC electricity once rather than at every device.”

Whichever type of system is operating, the electricity is then delivered along Ethernet cables, ensuring there is no need for expensive re-wiring or ongoing Portable Appliance testing (PAT) as the connected electronic devices are all low voltage. The results for ELe, which was established in 2014, are incredible.

Caroline Clayton added: “We have been working with three private schools in South Africa. In one of these schools 28 desktop computers are now being run on 700watts of power. That was only previously enough to power four.

“We have been working with Intel to increase cost savings by eliminating the power supplies and fans in computers and monitors as there is no longer the large amounts of heat generated, which saves further power including reducing air-conditioning HVAC usage too.”

It also has a significant impact on carbon emissions. ELe’s figures suggest that for every 30 computers powered using its system, two tonnes of carbon are saved every year compared with traditional methods.

Anne Donnelly said: “They have found a way to simplify the delivery of electricity and apply that at low cost in order to deliver huge savings and environmental benefit.

“ELe deserves to be recognised for creating something that solves a problem most people would never have recognised, but which represents a major cost for any business which relies on electricity to function.”

The Merseyside Innovation Awards recognises innovation across all sectors, including manufacturing, service providers, digital and logistics.

This year it will give out two awards – One for businesses with a turnover of up to £1m, which includes a £10,000 prize, and a second for businesses between £1m and £25m turnover.

For more information about ELe visit www.extremelowenergy.com or call 0845 6868 898.