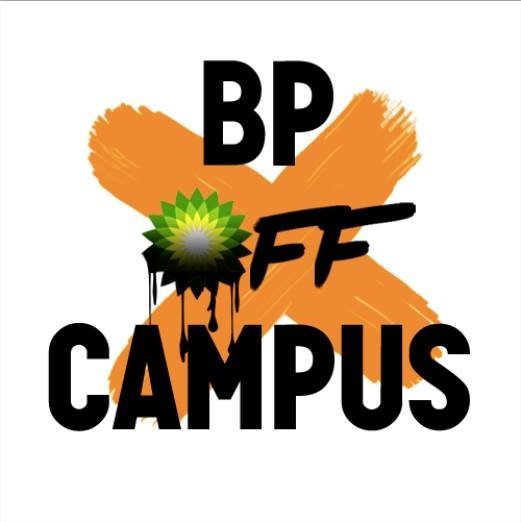 Students from Fossil Free Warwick University have launched a new campaign targeting the presence of the petroleum company BP (formerly British Petroleum) on their campus. Their primary demand is for the University to remove the BP Archive from Warwick’s library. In early July the group successfully persuaded the University to commit to stop investing in coal, oil and gas companies.

Announcing their new campaign with a banner drop and speeches during an open day at the University, they have issued a letter to Warwick’s management giving them until Nov. 30 to initiate arrangements for the vacation of BP from the campus. The date was chosen to coincide with the beginning of the climate summit in Paris, where world leaders are set to sign an international agreement on climate change.

BP house their only UK-based corporate archives on the University of Warwick’s campus. They have previously been criticised for refusing to allow campaigners and researchers access billions of pounds worth of research into renewable technologies that the company conducted in the 80s and 90s. Fossil Free Warwick discovered that all documents in the Archive prior to 1976 were kept under lock and key, contrary to BP’s chairman Carl-Henric Svanberg’s statement at a shareholder meeting that, “Nothing is locked away. We share everything happily.”

The group are linking up with the national network of anti-BP groups, and supported protests at the British Museum earlier in the month. They are keen to show that divestment from fossil fuels is just the starting point for the Fossil Free movement.

“After successfully winning our campaign for divestment, we’re taking the fight straight to a major fossil fuel company this year,” said Leah Lapautre, a member of Fossil Free Warwick. “BP’s presence on Warwick’s campus is an insidious example of the close connection between the fossil fuel industry and our public institutions. To have the presence of BP’s corporate archive on our campus is outrageous, given the desperate need we have to break the power of this industry and take action on climate change; it legitimises their behaviour and sends the message that our community is okay with what BP is doing. It’s also inconsistent with Warwick’s pledge to stop investing in these companies,” she went on.

BP has just been listed top of a table ranking European companies blocking the transition to a renewable energy system. It is also being sued in a British court for complicity in the kidnap and torture of a union activist in Colombia in the early 2000s.