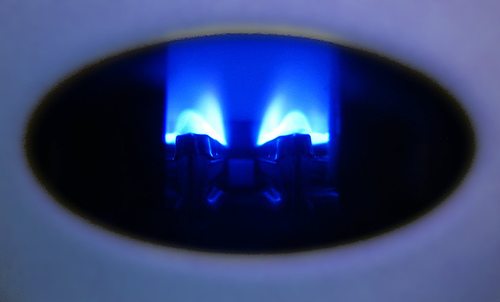 The law of averages: UK off-grid homes feeling the effects

To quote Mark Twain,“It ain’t what you don’t know that gets you into trouble. It’s what you know for sure that just ain’t so.”

It’s often the case that when we learn something important, we never forget it. And it’s such a point that was brought to my attention when considering the current policy of electrification of the rural economy. So it was time to dust off the grey matter and remember when I first went back to college to take my heating exams.

Then, the golden rule was always: before you take pen to paper, check what fuel you’re going to use. For many of us in the UK, this is a relatively simple question. If our home is ‘on-grid’ (and in the UK this more or less means connected to the natural gas supply) then hey presto; it’s gas.

However for around 2.5 million, or 12% of UK homeowners, it’s a different story. Having a home off the gas grid poses a number of issues, but the first is always, “If I can’t use natural gas, then what?”

Historically, the UK has used coal for our heating needs but in the 1970s there was a rush to several newfangled devices including electric storage heaters, heating oil and latterly liquefied petroleum gas (LPG) for off-grid homes.

Making a choice of fuel type has long-term consequences for the government and off-grid homes, as once the infrastructure is put in place it’s much more expensive to switch. By sheer market numbers, heating oil won this battle, as electric storage heaters were less than ideal, practically requiring their own power station to run at night and older gas boilers would enthusiastically consume litres of LPG, and at less energy per unit than oil. Therefore LPG always seemed the expensive route and oil won out.

But how times change, and with the new technology inside modern gas boilers, and a little insight into how the market presents the consumer with key numbers such as fuel costs, maybe the tide will soon be turning in favour of LPG.

So what’s with the numbers? Well, I recently went to see a bulk LPG supplier who was considering how to approach oil customers with a view to switching, and as ever the issues of energy/price per unit came straight to the top of the agenda. The figure quoted for oil was around 58p per litre, so I decided to check this out.

To use another phrase popularised by Mark Twain, what I found were “lies, dammed lies and statistics”. This is a saying that’s as true now as in the 19th century. When it comes to fuel prices, there seems to be a fog surrounding the figures. Very little seems clear, even when you’re presented with an average price. I mean, what could be clearer than a market average of 58p?

The average UK homeowner is facing a crisis in controlling their expenditure, coupled with increasing instances of fuel poverty. The rise of fuel costs for UK homes could easily tip millions of families into fuel poverty, which would be a catastrophe for our nation. The government’s policy of electrification of our rural economy and lack of attention to detail in fuel pricing and energy efficiency is, in my opinion, socially irresponsible and damages our nation’s wellbeing.

When I thought more about this it seemed to me there are actually two averages at play, and it’s only the second, real-world ‘consumed average’ value we need to concern ourselves with.

The first average which is typically quoted to consumers is the published price that’s available, averaged across the year and taken from quotes given by suppliers, but this excludes VAT and is also often the bulk order price. I checked out the average 2012 price of 58p and at no time could I actually buy oil at that price. The best I could find was 63p plus 5% VAT.

The consumed average is the one that should really concern us, as it reflects the average price when oil is actually used. For example, as in the first average, if you take the price of oil in the summer months into account you lower the corresponding winter oil costs. But unfortunately in the real world, UK homeowners cannot take advantage of this price as fuel storage is limited by tank size, traditionally around 1,000 litres for off-grid homes.

As such, if you compare the published average against the real-world consumed average, taking into account increased consumption in the winter months, then the actual fuel bill for a UK off-grid homeowner rises by over 20%, or £400 annually, than what a consumer would calculate if they chose to use the published average. This disparity can be seen in the graph below. 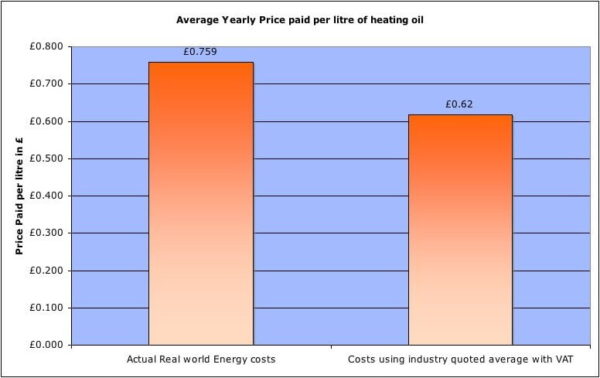 Additionally, if you take into account the energy efficiency of the process of turning oil into useful heat, and compare this with LPG, you’ll be surprised to learn that even though LPG has a lower energy output per litre, it now represents a more economical and environmentally friendly choice for heating off-grid homes.

LPG for heating now costs around 48p a litre, and the maximum efficiency that gas boilers can achieve is now at around 98%, using Zenex’s super condensing GasSaver and Superflow technologies. This is compared to oil and it’s much lower efficiency of around 55% (when you include boiler cycling, and domestic hot water use, which the Energy Savings Trust reported was barely 30% efficient).

When it comes to energy efficiency we need to be honest with consumers about what the real costs are, so why isn’t the government doing more about this? Is it afraid to upset the oil industry?

Unfortunately the government seems to be going down a muddy track in tackling rural off-grid policy. Promoting the electrification of the heating and hot water services for off-grid homes, rather than more cost-effective options like LPG, shows us clearly that the government advisers are removed from reality and should do more to promote energy efficiency for its consumers.

Why ‘sticky’ groups may be the cause of our energy woes