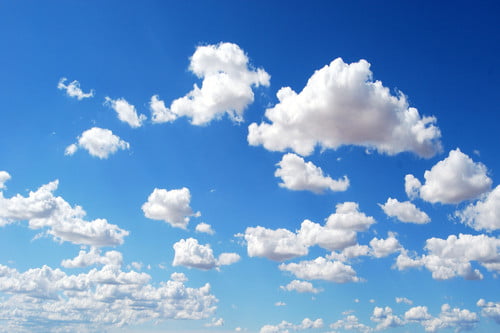 As Stark As It Gets: Climate Change Is Eliminating Clouds

Occasionally, it can feel quite lonely to be an environmentalist. We take the time to familiarize ourselves with difficult scientific concepts, study data and understand it, and then try to explain it to other people. Depressingly few of them seem to care. Even worse than that, some of them will outright refuse to believe you at all. A recent poll revealed that 25% of Americans don’t believe it’s happening at all. Of those who do believe it’s happening, 70% aren’t willing to pay more than $10 a month to stop it happening. Those aren’t happy numbers.

Part of the problem with explaining why people should be concerned about climate change to those who don’t grasp the science is that it isn’t an easy concept for them to understand. As far as they’re concerned, it’s cold in winter, hot in summer, and it still rains roughly around the time it’s supposed to rain. They can’t see any difference. The polar ice caps are miles away, and they’ve seen someone on television saying that it’s all made up, so they don’t believe it. You can’t win an argument with someone so opposed to it with difficult scientific concepts.

Usefully – and somewhat terrifyingly – you can now give them the starkest and most easy-to-understand fact we can imagine; a new report confirms that climate change is destroying the planet’s essential layer of cloud cover, and without it, we’re all going to burn and die.

The link we’ve just provided is to a scientific paper which documents the results of recent studies. It’s extensive, and you’re welcome to read it in full, but we’ll break it down into the essential information for you here. Greenhouse gases, which are known to exist and have been proven to exist, have so far been observed to be trapping heat within the Earth’s atmosphere and preventing it from returning to space. That contributes to global warming, and that isn’t good.

What’s changed in our understanding of greenhouse gases is that we now know that in addition to trapping gas within the atmosphere, it’s also breaking up stratocumulus clouds. That’s because of the carbon-heavy nature of greenhouse gases, which cause the clouds to dissipate. If those clouds were to disappear, the research paper predicts that temperatures could shoot up by a factor of over fourteen degrees, and fast.

Existing computer models used to predict the effects of climate change haven’t taken into account the potential for loss of (or change to) cloud cover, but now the new data has been fed into a supercomputer at the California Institute of Technology, the results give pressing cause for alarm. At any one time, cloud covers up to 20% of the Earth’s oceans, thus reflecting radiation back into space. Without that layer of protection, we’re going to roast.

There’s a very specific trigger point for this to occur. When the level of carbon dioxide in the atmosphere reaches 1200PPM (1200 parts per million), the clouds will lose structural integrity and drift apart. Such a drastic change in temperature would make human and animal life around the equator impossible and would raise the temperature of the Arctic Ocean to such a level that a human could swim in it with little fear of freezing. Swimming would become the default option for anybody living in a coastal town or city, because they would be underwater. The implications for the polar ice caps are obvious and catastrophic.

At present, we’re emitting 410PPM of carbon dioxide into to the atmosphere, meaning we’re a third of the way there. With emissions continuing to rise, and the United States shirking its responsibilities, we’re currently on track to reach 1200PPM within a century. If industry continues to expand, that process will accelerate. It may not be a problem for us, but it’s likely to be a problem for our children. It will most certainly be a problem for our grandchildren, unless action is taken to prevent it.

At present, given all that we’ve discovered about climate change in the past twenty years, the amount of atmospheric waste released by large industrial companies ought to be classed as criminal damage on a global scale. Every time carbon is emitted from a factory or anywhere else, we might as well be playing mobile slots like ‘Wild Weather’ at Amigo Slots. In the slot game, every time players spin the reels, they’re greeted by a different set of weather symbol and temperatures. There couldn’t be a more perfect comparison for what big business is doing to our atmosphere, and therefore our clouds. They’re putting their money in, giving things a spin, and paying no attention to what the weather says so long as they’re making money out of it. Pretty soon, they’re going to find out that our slot machine Earth is done paying out, and there’s no way to reclaim their losses.

A Word From The Wise

So, returning to the hypothetical conversation with your climate-change denying friend from the beginning of this article, let’s assume you’ve told him that the clouds are going to vanish, and the world is going to burn. Hopefully, that’ had an effect, but you may still encounter resistance. You, after all, aren’t a scientist. You’re not positioned to make such doom-laden prophecies. That’s a fair point, so let’s take on board the words of somebody who is.

Michael Mann is a climate scientist, author, lecturer, and director of the Earth System Science Center at Pennsylvania State University. He’s s qualified as anybody discussing environmental concerns could ever be. When asked to explain, in simple terms, what the net effect of losing our layer of stratocumulus clouds would be, his exact response was ‘the end of human civilization as it currently exists.’