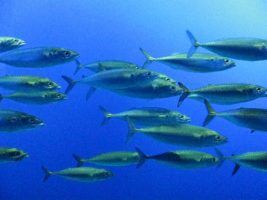 Caribbean Marine Life Threatened Due To Under-reporting Of Fisheries Catches

A recent study published in the open-access journal Frontiers in Marine Science reports marine fisheries catches have been drastically under-reported in the Turks and Caicos Islands in the Caribbean, causing a threat to the marine environment and livelihoods of the local community

Actual catches on the islands were an alarming 2.8 times, or 86% higher than that reported to the FAO, and this has very troubling implications.

Lead researcher Aylin Ulman, recently based at the Sea Around Us, and her team call for urgent action from policy-makers to ensure the future sustainability of the fishing industry in this archipelago nation.

Fishing has historically been the main industry in the Turks and Caicos Islands and in some areas up to 75% of locals are involved in the fishing industry. The rise in tourism is creating more demand for locally caught seafood and is placing increasing pressure on local marine life.

The islands operate small-scale fisheries for queen conch, Caribbean spiny lobster, and finfish as the three main targets. The local government is required to report all catches to the Food and Agricultural Organization (FAO) to be able to trade with signatory nations of CITES (Convention on International Trade in Endangered Species of Wild Fauna and Flora). The international trade of wild animals must be shown to not threaten the survival of local stocks.

However, the data that are passed on to the FAO are incorrect because they only account for commercial catches that will be exported, and do not include seafood caught and consumed by locals and tourists on the islands. This can put future stocks at risk.

“DEMA (The Department of Environment and Maritime Affairs) has done a great job of monitoring fish sold to the country’s fish plants,” said Ulman; “However, it seems they have not always had enough staff to monitor seafood being sold or given to locals and tourists, whether that be at the dock, in shops, or in restaurants.”

For a better estimate of the amount of seafood caught around the islands, the authors assessed all catches between 1950 and 2012. More accurate records of catches for export, artisanal, and subsistence fisheries were identified from Turks and Caicos Islands Government reports. A recent and thorough seafood consumption survey from 2013 involving locals and tourists was additionally used to estimate the previously unreported local consumption of seafood.

The reconstructed data also included evaluations of recreational catches and illegal poaching. Using these data and mathematical models, Ulman and her team have made the most accurate estimates to-date of seafood consumption by residents and tourists on the islands.

Reported catches have been used to put regulations in place for sustainable catch limits. However, these limits have been unsustainable, leading to the over-exploitation of marine life.

In fact, local consumption of conch is close to the total number allowed to be caught under these ‘sustainable’ limits, and this is without taking into account the number of conch that are exported, which is almost equal to local consumption. As a result of this study, the authors hope that future catch limits will be based on total seafood catches from all fishery sectors.

“Local seafood consumption surveys should continue to be completed once every three to five years to track changing patterns, especially with the ongoing growth of tourism. Local consumption catches must be factored into the equation when calculating the total allowable catch limits, especially for key species of conch and lobster, to determine if it is even possible to continue the export business,” said Ulman.

New legislation is needed to reduce seafood catches so that stocks are being fished within safe limits, and this study adds new weight to the urgency of this issue. The Turks and Caicos Islands Government have recommended a stop to the export of conch for up to five years to allow populations to recover, but they have been delayed in implementing this.

The staff at DEMA now have the knowledge to set catch limits that really will work.

“While the results of this research may seem like bad news, we are quick to emphasize that this new data may actually present an opportunity,” said co-author Edward Hind; “The staff at DEMA now have the knowledge to set catch limits that really will work. If the government supports the Turks and Caicos Islands fisheries scientists in collecting better catch data, then the country can have healthy fisheries for decades to come”.

The under-reporting of fisheries catches is common in other regions and neighboring island nations. Haiti, the Dominican Republic, and Jamaica are facing the same the problems and urgent action is required to avoid further over-exploitation of marine life.

Read the full article in Frontiers in Marine Science.