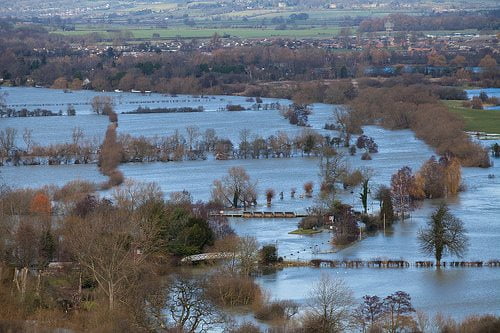 Climate change is increasing the risk of extreme rainfall and flooding in Britain, according to the findings of a pioneering new study presented at the European Geosciences Union (EGU) conference in Vienna on Wednesday.

Following the wettest winter since records began in 1767, during which many parts of the UK were flooded for months, the Oxford University project concludes that manmade global warming has increased the risk of extreme rainfall in southern England and Wales by about 20-25%.

At the time of the floods, some experts cautiously suggested that climate change was a factor in the severity of the storms that battered the country.

The majority emphasised that is was not possible to link individual weather incidents to the long-term warming trend, saying only that it was likely such weather patterns would become more familiar as the planet heated up.

The research team did this with the help of the public by running tens of thousands of simulations on climate modelling technology using two scenarios.

The first was based on the current global climate, while the second projected what the climate would be like today had mankind never began burning fossil fuels.

Their massive haul of data was analysed in an ongoing citizen science project that asks volunteers to download and run the experiment software, sending the results back to Oxford in the world’s largest climate modelling experiment.

Ultimately, the results show that winters like the one just gone are now a one in 80-year event in today’s warmed climate, rather than being a one in 100-year event.

“Past greenhouse gas emissions and other forms of pollution have ‘loaded the weather dice’, so the probability of the south of England experiencing extremely wet winters again has slightly increased,” said Dr Friederike Otto of Oxford’s Environmental Change Institute.

The researchers say their work is not yet finished. In the coming months, they want to try and use their findings to estimate the damage – both material and economic – this increased risk will cause.

“Total winter rainfall, although useful as a benchmark, is not the direct cause of flood damage, so we are working with collaborators, such as the Centre for Ecology and Hydrology, to explore the implications of our results for river flows, flooding and ultimately property damage,” Otto explained.

One recent study suggested that economic losses caused by flooding in Europe could increase four-fold by 2050, as the growing risk of extreme weather combines with increased development to put more properties and businesses at risk.