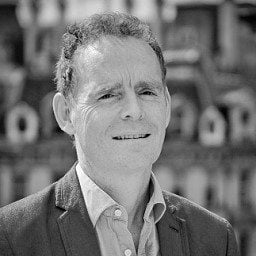 Matthew has been director of Green Alliance since May 2010 and has 30 years experience of UK and international environmental issues. Prior to Green Alliance, Matthew was head of government affairs at the Carbon Trust; campaign director at Greenpeace UK and founder and chief executive of the renewable energy agency Regen SW, where he developed Wave Hub, the world’s first proving ground for wave energy farms. He was appointed a trustee of Oxfam GB in 2015. He read environmental biology at Liverpool University and spent the early part of his career working on tropical forest conservation. He speaks to Blue & Green.

In 140 characters or less – what is Green Alliance?

Green Alliance is an independent UK think tank focused on policy and politics as a means to achieve better environmental outcomes.

What was the driver for creating Green Alliance – what gap did it fill?

The organisation was founded in 1979 by a cross party group of senior figures, including peers, politicians and judges, to address the lack of environmental perspective in British political life.

Our primary audiences are decision makers in business and government.

What difference does Green Alliance want to make?

Our mission is to restore the health of our natural environment and accelerate the transition to a resource efficient, zero carbon economy.

Politics is both the barrier and the solution.

Political priorities are driven by perceived public and media interest which change. During an economic recession political concern about the environment is usually low because it is seen to conflict with maximising the quantity of short term economic growth. However, public support for environmental action is never far below the surface in Britain, and often emerges when there is a local conflict about new housing or infrastructure, or a national debate about how we tackle issues like climate change, flooding or air pollution. In the right circumstances this can be translated into political leadership and policy solutions which improve the quality of our environment and our lives, eg David Cameron’s commitment to phase out coal fired power stations in a cross party climate pledge we brokered, and we have seen an acceleration of old coal closure in response which has already begun to reduce local air pollution and carbon emissions.

We work closely with forward thinking businesses, academics and leading environment and development NGOs. The best companies are very aware of the need to protect the natural resources on which their supply chains depend, and their real world experience helps to inform our analysis of how public policy can help drive greater circularity and zero carbon investment.

Academics often have great insight which we can help translate into the policy sphere, and NGOs have a good nose for the big issues which need to be addressed by politics. We synthesise these insights into policy solutions and political priorities, and then work with allies to land them with government. For instance, in discussion with the offshore wind industry and government, we identified a way of providing the former with greater investment certainty and the latter with greater flexibility to respond to cost risks; last year, the government adopted our suggestion of committing to a minimum market size for offshore wind in the 2020s, conditional on the industry meeting transparent and stretching cost reduction targets. In response to the government’s decision, DONG announced that they would invest another £6 billion in the UK’s offshore wind sector.

Is government and corporate action today commensurate with the economic, social and environmental challenges we face?

Clearly not, or we would not be seeing a decline in health in many of the natural systems on which we depend. We thought we’d largely brought pollution under control in Britain, but recent research on public health impacts and the diesel emissions scandal shows we still have a long way to go to make our lifestyles sustainable.

Whilst we are only in the foothills of the journey to a zero carbon economy there are more grounds for optimism here than for the recovery of the natural environment. Low carbon technology is coming down in price faster than anyone predicted and carbon targets and consumer preferences are driving innovation and uptake. The electrification of transport will make a big contribution to cleaning up the air in our cities.

The loss of forests and the decline in the health of our oceans because of an extractive approach to nature is proving much harder to change, because it requires more systemic change than tackling climate change, which is ultimately a fuel substitution challenge. Sustainability champions around the world are slowing the decline, and when living standards rise in developing economies this becomes a higher priority for their society. For example, Brazil is now putting much greater effort into tackling Amazon deforestation because of public pressure within the country.

What led you to your current role?

My love of the natural world led me to train as a biologist and work on tropical forest conservation. This, in turn, exposed me to campaigning and an interest in how change happens. After a formative decade at Greenpeace doing everything from international diplomacy to direct action I discovered the thing I most loved was advocacy: corralling arguments, evidence and allies to influence political decisions. I’m constantly surprised by how effective it can be but, even when we get knocked back, it is so much better being a participant in the debate than a concerned observer.

How can people – individuals and organisations – find out more about Green Alliance?

Find out more about Green Alliance at www.green-alliance.org.uk

Read our blog at www.greenallianceblog.org.uk

If you are a business interested in working with us, please contact Leah Davis, strategy director at ldavis@green-alliance.org.uk