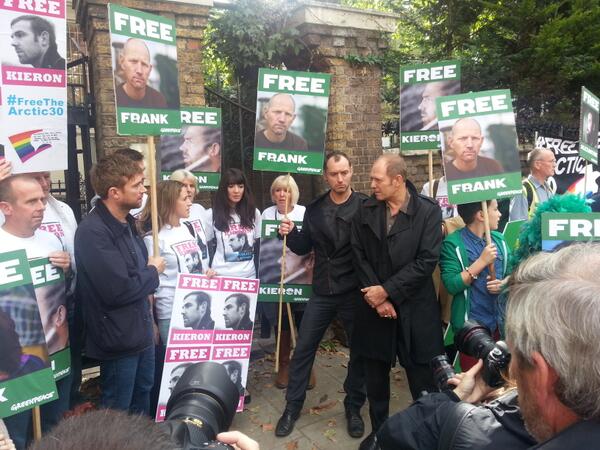 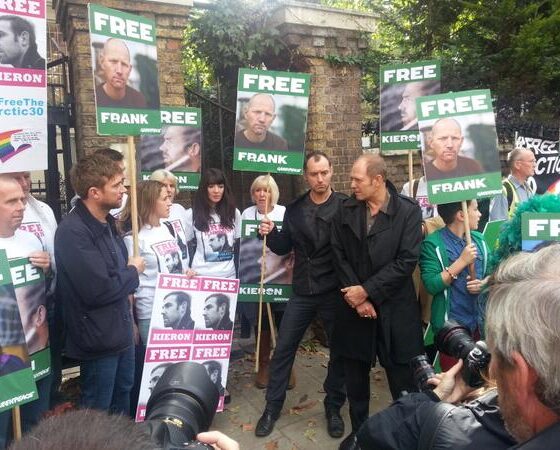 Protests have been held around the world to show support for the 28 Greenpeace activists and two journalists being held by Russian authorities on charges of piracy. The Dutch government announced on Friday that it is launching legal action to free the accused.

An estimated 800 people gathered at the Russian embassy in London on Saturday, including famous faces such as fashion designer Vivienne Westwood, actor Jude Law and musician Damon Albarn. Law and Albarn are friends of Frank Hewetson, one of the accused.

Some protestors wore T-shirts with messages of support, while others held placards showing the faces of the activists.

However, the government of the Netherlands announced on Friday that it would launch legal action to free the ‘Arctic 30’, two of whom are Dutch, and their vessel the Arctic Sunrise, which is Dutch-flagged. The Dutch foreign minister, Frans Timmermans said, “I don’t understand why this could be thought to have anything to do with piracy, I don’t see how you could think of any legal grounds for that.”

The Russian government will now be questioned over its actions before the International Tribunal for the Law of the Sea in Hamburg.

“Russian officials will now be called to explain their actions before an international court of law, where [they] will be unable to justify these absurd piracy allegations”, Greenpeace lawyer Jasper Teulings commented.

The charges have been made despite Russian president Vladimir Putin saying that the activists were clearly “not pirates”, and Vladimir Lukin, Putin’s human rights ombudsman arguing there was “absolutely no basis” for the piracy charges.

Executive director of Greenpeace International Kumi Naidoo said that seemingly the activists’ only crime was to possess a conscience. “This is an outrage and represents nothing less than an assault on the very principle of peaceful protest”, he said.