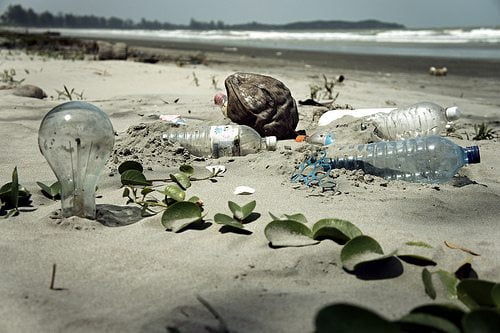 Boyan Slat, a 19 year-old Dutch inventor, claims to have invented a way to collect almost 20 billion tons of plastic from the oceans in few years, while making a profit.

His invention is the Ocean Cleanup Array, a platform that would use a series of floating booms and processing platforms anchored to the seabed to suck plastic from the seas like a giant funnel, leaving marine life behind. The platform is thought to be self-powered by clean energy from the sun and the ocean

“The gyres are five areas in world’s oceans where rotating currents create an accumulating mass of plastic dubbed ‘Garbage Patches’”, explains Slat on its website.

“Moving through the oceans to collect plastic would be costly, clumsy and polluting, so why not let the rotating currents transport the debris to you?”

Plastic is collected for recycling on land, although the inventor said that it would not be possible to retrieve 100% of the waste dispersed in the sea. He added that it is essential carry out prevention on land as well, developing further systems that can intercept plastic before it reaches the sea.

Slat and his friend came up with the idea during their last year of secondary education. They performed experiments on concentration of particles, separation of plastic from plankton and on plastic depth measurement devices. When they realised their project could be effective, they set up the Ocean Cleanup Foundation. The project is now at halfway through its feasibility study, but has great chances of success.

According to Slat, the profits derived from recycling all the tons of plastic collected could be an estimated $500 million (£316 million), more than the project would cost, making it not only beneficial for the planet but also potentially profitable.