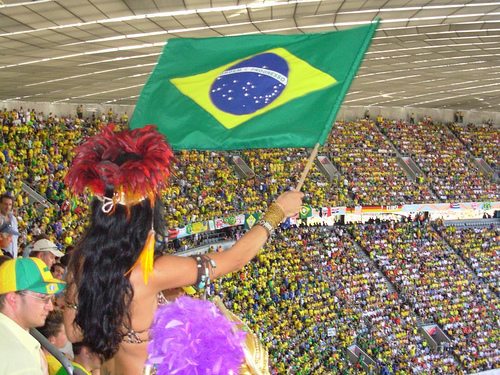 With the 2014 World Cup kicking off next week, all eyes are on the delicate socio-political situation in Brazil, where the enormous expenditure set aside for the event has sparked outrage among citizens, many of whom lack access to basic health and education services.

In the lead-up to the tournament, Football’s governing body Fifa outlined a sustainability strategy to explain how it will try to minimise its impact on the environment. The strategy is based on eight principles: accountability, ethics and anti-corruption, transparency, respect for stakeholders’ interests, respect for the rule of the law, collaboration, long-term approach and leverage.

The World Cup’s sustainability programme, Football for the Planet, would be the chance to promote green measures such as green buildings, waste management and sustainable community development, Fifa said, which would benefit Brazil even after the event. Meanwhile two stadiums – Arena Pernambuco in São Lourenço da Mata and the Estádio do Maracanã in Rio de Janeiro – will be powered by solar energy.

Fifa’s head of corporate social responsibility Federico Addiechi said last month, “Sustainability is one of the key tenants in our vision for the 2014 FIFA World Cup. After bringing solar power to 20 Football for Hope Centres in Africa, we are delighted that our collaboration with [Chinese solar firm] Yingli is continuing and is now bringing solar PV systems to football stadiums in Brazil. We hope this landmark project will be the catalyst to increase the production and use of renewable energy in the country”.

Despite all the good intentions, both Fifa and the Brazilian government have faced criticism in relation to the World Cup – particularly because of the tournament’s implications on the country’s poorest citizens. Brazil is one of the world’s fastest growing economies, but is still facing many challenges related to inequality and corruption.

Perhaps the most controversial measure of the World Cup’s planning was the decision to evict more than 1 million people from disadvantaged favelas, in order to allow for the building of infrastructure. Some of those affected recently took part in the second annual La Copa Popular, or the People’s Cup – an alternative to the main event that kicks off next week.

Also controversial are the large sums the government has loaned from state banks, which experts say will affect citizens, considering that Rio de Janeiro is also hosting the Olympic Games in two years’ time. The government has already spent more than £9 billion on the World Cup and some locations, such as the stadium in Manaus, in the Amazon region, are unlikely to be of any use in the future – despite the great costs involved.

Brazil’s president Dilma Rousseff defended the work of the government, insisting that those who took to the streets in protest, clashing with police, were a small minority. However, a recent survey by the Pew Research Centre found that general dissatisfaction in Brazil for the event is felt by 72% of residents – more of a large majority.

Meanwhile, graffiti has appeared in major cities across the country, attacking Fifa and showing starved children eating footballs and looking at the World Cup.

Echoing the build-up to the 2014 Winter Olympics in Sochi, Russia, the Brazil World Cup has generated much debate on a series of social and environmental issues. Its decision to use solar power at certain stadiums is positive, but doesn’t go far enough to undo the social upheaval caused by their development.

And with Fifa already facing criticism over forced labour and bribery in relation to the 2022 tournament in Qatar, the wait continues for a major sporting event to take place without some sort of controversy.