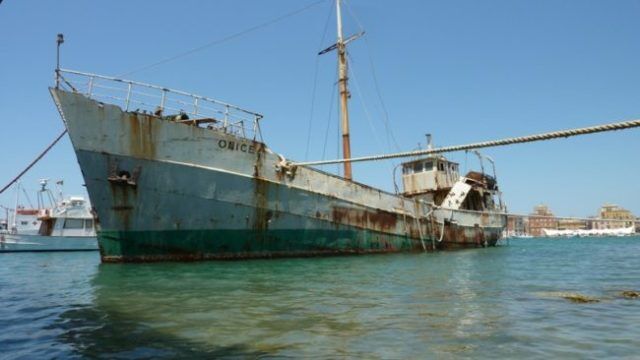 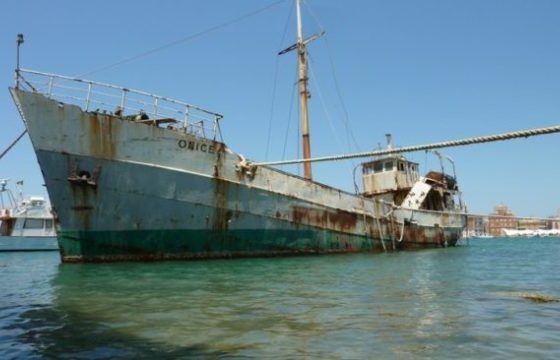 The project is transforming a former 1911 sailing freighter so that it can be used for ecological freight transport, releasing zero emissions through propulsion using only the wind and self-produced electricity.

This, in a nutshell, describes the “Brigantes” project, an ambitious renovation project aimed at promoting the benefits of carbon neutral shipping, and strengthening the Sail Cargo Alliance, a growing movement of eco-sustainable freighters.

The 30 meters long ship is currently being fully restored in a specialized shipyard in Trapani, Sicily. The new launch has been scheduled for 2018 at which time the reborn vessel will again sail the world seas, and one day have a chance to meet the Eye of the Wind, its world famous twin-sister ship.

A Historical Freighter Saved From Demolition

The sail freighter with the original name “META” was built in Germany in 1911 by the renowned shipyard Lühring. Its 30 meters long, 7 meters wide riveted iron hull was optimized for speed and designed to sail one of the most dangerous seas in the world: the North Atlantic. As a spoil of war to the French in 1920, it arrived in Italy in 1923 and was used for the transportation of talc from Sardinia to Livorno. In the Fifties it underwent dismantling of the sailing rig, was converted into a motorboat and renamed Onice. From 1953 it transported merchandize between the Island of Pantelleria and the mainland. In 1998 the Onice was laid up and abandoned in a corner of the harbor in Trapani. In 2016, to save it from demolition, a group of Italian-Austrian-German enthusiastic investors bought the former sailing vessel. A delicate and precise examination of the hull plates at the Da.Ro.Mar.Ci Naval Ferro Snc shipyard in Trapani revealed the surprisingly good state of conservation of the hull plates. The “third life”, the recovery of the Brigantes, the new name given to the vessel could formally start!

There are basically two reasons that led the Brigantes team to venture into cargo sailing. The first was the wish to revive a world long forgotten, where navigation was experienced as an art of functional traditional seamanship. The second was the desire to be part of the growing number of people who want to change things and who believe in a sustainable future, made of healthy products, fair-solidarity and responsible economy. An unusual economic concept, intriguing and authentic.

How To Participate In The Project

Anyone can become part of the Brigantes project, offering sponsorships, materials, equipment, instrumentation, or even volunteer labor. Yet the strongest form of participation will be the acquisition of a limited number of ownership shares bearing the certainty of becoming part of a pioneering adventure and a small marine freight revolution (contact via www.brigantes.eu for details). Large companies or associations committed to environmental protection and a sustainable economy may avail of Brigantes to transport their products or foods. The propulsion system on board, in addition to the sails, will consist of an electric motor combined to a solar / wind power plant. This is a unique opportunity for these companies to support a real sustainable alternative to “traditional” transport and demonstrate consistency with its own business philosophy.

A School Of Vocational Training For Sailors

In addition to delivering zero-emission goods between the Mediterranean Sea and the Atlantic Ocean, Brigantes will offer anyone the opportunity to learn how to navigate on a traditional sailing ship. In turns, up to ten passengers will be accepted on board for a unique sailing experience. The berths will be housed in a community room, intentionally promoting an environment akin to the ancient tradition of sailing. The seven crew members as well as the captain will be available to share and explain the secrets of sailing manoeuvers needed to conduct Brigantes on the high seas. Yet the ship will also offer the opportunity to embark as “simple” paying guest and participate in international events, maritime festivals, historical regattas and any activity that might help raise awareness for the noble purpose of this project.

The Twin Sister Ship: ‘Eye Of The Wind’

To best understand what Brigantes will eventually look like, just take a look at the “Eye of the Wind”, the twin-ship built in the same yard. Christened as Friedrich, after the name of the longtime Friedrich Kolb who commissioned the construction of the ship, it was launched in 1911, three months before the Brigantes. In 1970, after a devastating fire, the ship was rescued by a group of young enthusiasts led by Anthony “Tiger” Timbs, who turned it into one of the most famous brigs in the world. The Vessel was in fact used as a floating set for movies such as “Blue Lagoon” with Brooke Shields, “Tai-Pan” and “The White Squall” by Ridley Scott. Today Eye of the Wind continues to cruise the seas of the globe.

For the financing of the project the Brigantes Shipping company, owner of the ship and initiator of the venture has been inspired by the historical model of the “Partenreederei”, where investors become co-owner of the company and as a consequence co-owners of the ship. This financing model was frequently used in the last centuries in the sailing business in Northern Europe and is very similar to what we today would call crowdfunding. The protagonists of this extraordinary adventure are Oscar Kravina, professional boat builder and (project coordinator), the German engineer Tobias Blome, naval engineer and advisor to companies in the maritime sector, Daniel Kravina, entrepreneur and administrator of the company, and the Italian Giuseppe Ferreri, marine captain who began his own career on board of the Onice back when the ship was transporting goods between Sicily and the island of Pantelleria. He will eventually be entrusted with the command of the Brigantes. The design of the refit will respect the entity classification regulations by RINA (Italian Shipping Register), one of the most recognized navigational logs from the IACS (International Association of Classification Societies).