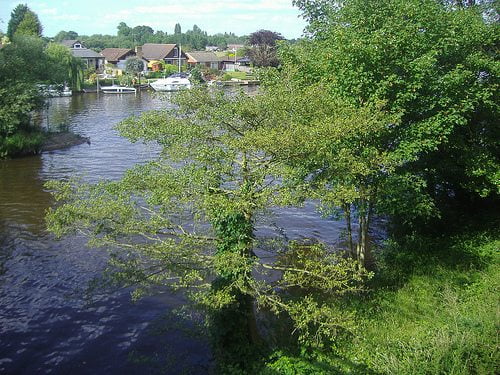 After kicking off the series by looking at Windsor on Monday, the second richest small town in Britain, as discovered by consultancy firm WealthInsight, is Weybridge. But how does it fare on sustainability?

Weybridge, located in the Elmbridge district of Surrey, has more than 800 millionaires among its 19,463 inhabitants, and six of the 10 most expensive streets for property in the south-east, according to the Times.

Surrey is an incredibly affluent county, with the highest GDP per capita of any county in the UK. Weybridge is the HQ of corporations like Sony and Procter & Gamble, while many well-known celebrities have lived or live in the town.

Two members of the Beatles, Ringo Starr and John Lennon, lived in Weybridge in the early 60s, and famous footballers such as Peter Crouch and Peter Čech also figure among Weybridge residents.

Surrey county council, Weybridge’s local authority, says it is aware of the problems around climate change and expects these to affect its residents.

“Changes in climate at global and local levels have significant implications for us, for future generations and the ecosystems on which we all depend”, it states on its website.

“Public services and infrastructure need to change in response to a changing climate and business will also need to look ahead and plan for their security and competitiveness.”

The council is part of the Surrey Climate Change Partnership (SCCP), which includes 11 boroughs, whose aims are “to tackle fuel poverty and help residents address rising fuel costs, reduce carbon emissions from our area and our own estate, to develop the local low-carbon economy and to address the risks posed by future climate change.”

If you live in Weybridge and are interested in ethical investment, read The Guide to Sustainable Investment 2013 for more information, and The Guide to Ethical Financial Advice 2013 to find a specialist ethical financial adviser near you.