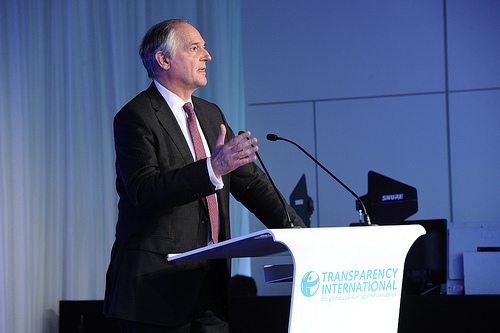 Paul Polman, chief executive of the consumer goods group Unilever, has become the first sitting CEO of a major multinational company to be awarded the WWF Duke of Edinburgh Conservation Medal.

WWF said that under his leadership, Unilever had become an example in sustainability, reducing its environmental impact while still managing to grow.

“Paul has shown what building sustainable supply chains – from raw materials to consumer goods – can mean in practice, and demonstrated that corporate leaders can be part of the solution to major environmental and social challenges”, said Jim Leape, director-general of WWF International.

Polman was appointed CEO in January 2009, after having spent nearly three decades working for Proctor & Gamble and, latterly, Nestlé.

Upon receiving the WWF accolade, he said, “The sheer size and complexity of the issues we face today can only be resolved through large-scale international partnerships and other forms of collaboration.

“It is a particular honour for me therefore to accept this award from an organization which has set the standard in driving these partnerships and in helping to make the world a better place for all.”

“The more our products meet social needs and help people live sustainably, the more popular our brands become and the more we grow”, he said.

In November, the sustainability rating agency Inrate ranked Unilever – the third-largest consumer goods company in the world – as one of the most sustainable investments on the Stoxx Europe 50 index. A separate study by LinkedIn also named it as one of the most sought after employers in the UK.

The Anglo-Dutch firm has received praise for its efforts to ensure all palm oil used in its products is 100% sustainable. Palm oil – a type of vegetable oil derived from palm fruit – is typically sourced from deforested land. Deforestation is a major driver of climate change and biodiversity loss.

Unilever recently pledged that by the end of 2014, all palm oil in its products will be traceable. The company is one of the biggest buyers of palm oil, purchasing around 1.5m tonnes each year.

Other recent winners of the WWF Duke of Edinburgh Conservation Medal include Israeli activist Ofir Drori and Dr Ashok Khosla, a leading expert on sustainable development.