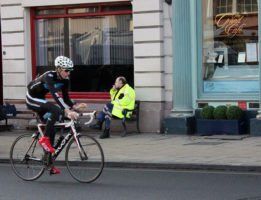 According to official figures emerging today cycling rates have decreased in Scotland, leading to campaigners calling for the Scottish Government to increase its spending on walking and cycling to a 10% share of the overall transport budget by 2020.

In a letter to the Finance Secretary Derek Mackay, an alliance of fourteen organisations ranging from public health charities to children’s rights organisations to environmental campaigns urged for the Scottish Government to invest in cycle and walking paths to benefit health, the environment, and the economy.

A snapshot of cycle statistics in Scotland:
– In 2015, only 1.2% of journeys were made by bike.
– This is a decrease from 2014, when 1.4% of trips were made by bike.
– Cycle rates have been stalled at under 2% of all trips for over a decade.
– Only 1.9% of the transport budget went towards building walking and cycling paths in 2015.
– The transport sector accounts for 28% of Scotland’s greenhouse gas emissions and little progress has been made in reducing carbon emissions from the sector since 1990.

The transport sector is the main cause of Scotland’s air pollution health crisis, responsible for thousands of early deaths each year. Air pollution safety standards continue to be breached in 32 Pollution Zones across Scotland.

The group stressed that investing in walking and cycling works, citing the example of Edinburgh City Council. It noted that Edinburgh Council has bucked the national trend on cycling rates for the last few years and over 10% of trips to work are currently made by bike in the Capital, due to the Council’s incremental investment in active travel, which is now at 9% of its transport budget.

Air pollution, mainly from traffic, is a major cause of early death in Scotland, and has been linked to cancer, heart attacks, and strokes.

“Air pollution, mainly from traffic, is a major cause of early death in Scotland, and has been linked to cancer, heart attacks, and strokes. Walking and cycling would be realistic alternatives to the car for millions of trips every year if only the Scottish Government were to provide the desperately needed investment in high quality walking and cycling paths which make people feel safe. If investment rates don’t change, then cycle rates won’t change. The best bit is that it doesn’t require any new money from Government but rather a shift in existing spending away from building yet more roads towards healthier, active travel.”

“Children have the right to a clean, healthy and sustainable environment, and this right is being directly threatened by air pollution worldwide and here in Scotland. There is an ever-growing body of evidence that toxic air can stunt children’s lung growth and development. We call on the Scottish Government to invest a greater share of its transport budget in walking and cycling infrastructure, in order to create safe, convenient and viable ways for people to travel by pollution-free modes. A shift from car traffic towards cycles and walking will create cleaner air and a healthier environment, benefiting our children and future generations.”

“The levels of obesity and overweight in Scotland are unacceptably high; 65% of adults are overweight and 28% are obese, ranking Scotland 5th highest for overweight and 6th highest for obesity in the OECD. The resulting financial impact on NHS Scotland is estimated to be £363m per year. By creating healthy lifestyle environments, such as active travel infrastructure and healthy food environments, we can empower a culture shift across Scotland which will bring multiple benefits to the fabric of society in this country.”

“We note that the government has recently reaffirmed its intention to see 10% of journeys by bike by 2020 — after all, so many other policies depend on achieving that target such as carbon emissions reductions. It’s only logical, then, that 10% of the transport budget should go towards active travel, for how else would that vision be achieved?”

“Air pollution and physical inactivity are major causes of stroke, heart disease, and chest illness in Scotland, and disproportionately affect many of the most vulnerable people in our society. Chest Heart & Stroke Scotland call on the Scottish Government to urgently increase its spending on active travel to enable it to meet its 2020 target, and to help tackle our endemic health inequalities.”

“More people died from lung conditions last year in Scotland than from heart disease and the numbers are rising. Our polluted urban areas and cities, particularly Glasgow, have the highest lung disease death rates in the UK. Air pollution affects our most vulnerable in society. It can cause serious problems for people living with lung conditions, poses a real danger to children’s growing lungs, and usually affects those living in deprived areas the most. It’s a public health crisis.”