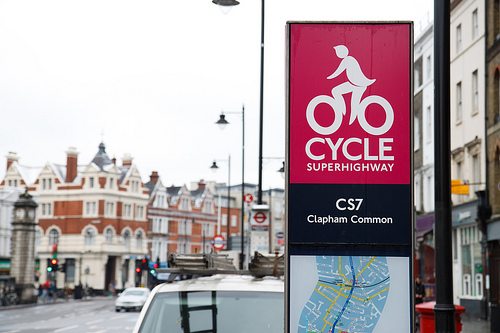 Hundreds of cyclists gathered outside Transport for London’s (TfL) headquarters on Friday to protest against the lack of road safety for cyclists in the capital.

The ‘die-in’ protest, which saw those involved lay down in the road, is similar to the tactics used in the Netherlands during the 1970s. The protest followed the news that six people were killed in cycle accidents in London in just a two-week period last month.

The protesters asked the mayor of London and the capital’s boroughs to spend at least the same per person on cycling provisions as the Dutch do. The organisers said the UK spends around £1.25 per person, in contrast to the Netherlands’ £33.

They also called for a ban on vehicles whose drivers cannot see adjacent road users and a full London wide segregated network to be built urgently. It was also suggested that cycling representatives should have two seats on the TfL board.

Donnachadh McCarthy, one of organisers of the protest on Friday, said, “We are here because Londoners are fed up of being killed. We need to have a modern, European, safe cycling network.

“We have bought the battle to TfL’s headquarters because these are the people making the decisions.”

A poll taken last year found that over half of the population believe that cycling in urban areas is dangerous. According to the survey, 70% of people want residential speed limits, reducing to 20mph in order to cut risk.

Meanwhile in August, the government announced that eight cities and four national parks across the UK would benefit from a £94m investment in cycling infrastructure. The money will be used to make roads friendlier and safer for bikes.