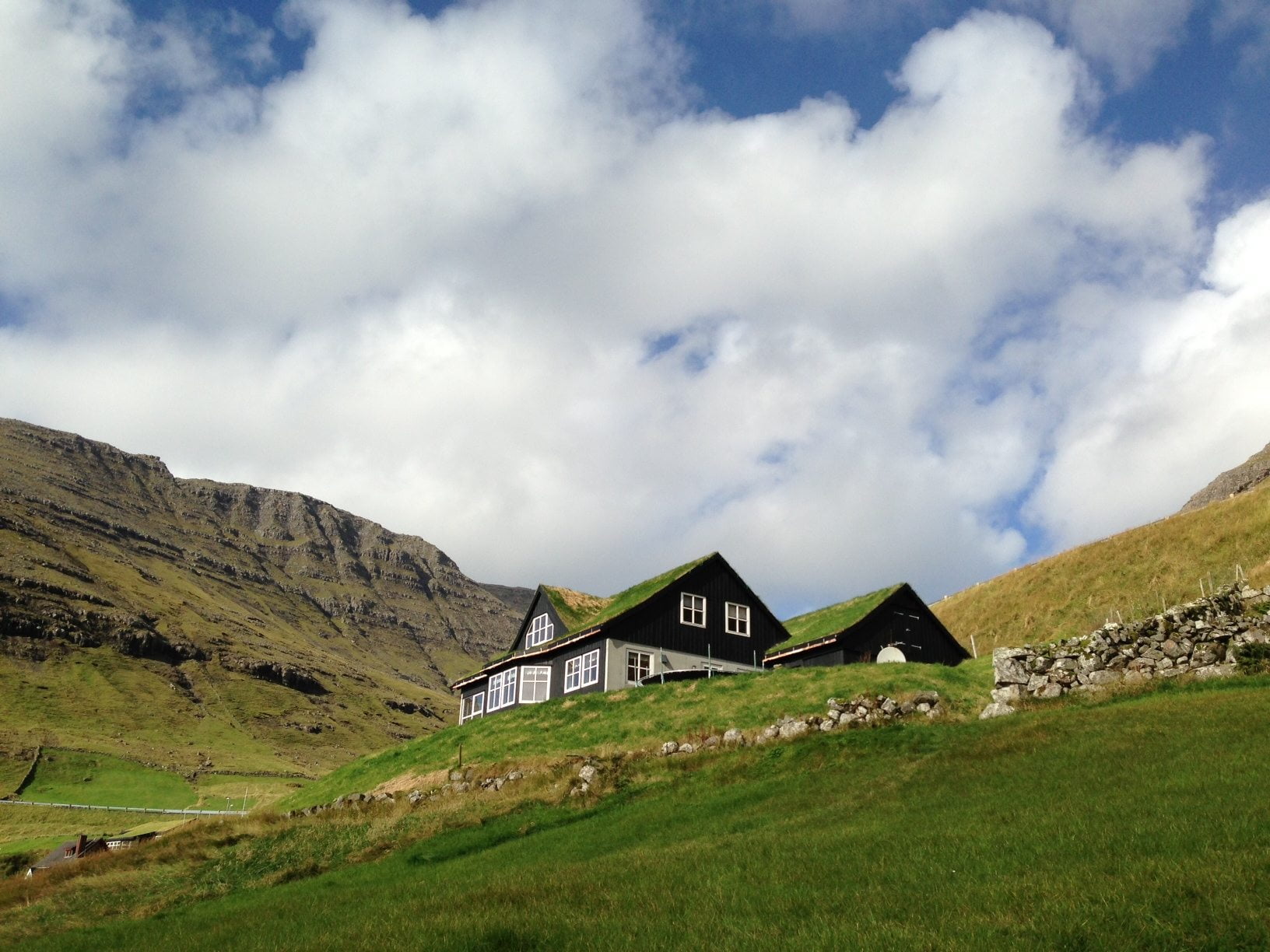 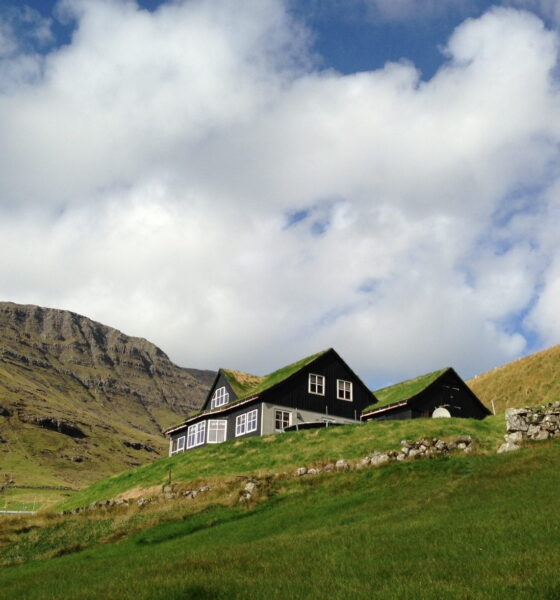 “The Faroe Islands: is that near Egypt?” I smiled as I stood in the queue at Gatwick, while the woman I was on the phone with from my bank tried to work out where in the world I was jetting off to.

She will have eventually found that my destination was actually around 200 miles north-west of Scotland, almost equidistant between Iceland and Norway – and certainly not in north Africa.  Føroyar, or to the English-speaking world the Faroe Islands, is an archipelago of 18 islands and one of the smallest countries not only in Europe, but the world.

During the second world war, thousands of British troops used the islands as a base, following Nazi Germany’s invasion of Denmark – of which the Faroe Islands belong. The British nicknamed the country ‘the Land of Maybe’, because the regularly changeable weather makes it nigh on impossible to plan anything. I experienced this for myself straight after stepping off the plane at Vágar airport – built by the British during their five-year stay – in the west of the islands.

My guide for the day, Andrias Thomassen, had called the local postman in the village of Gásadalur earlier that morning to check on the weather. The postman looked up at Eysturtindur, the mountain Andrias was planning on taking me up, and said it wouldn’t be possible because the conditions were too poor.

As it was, we reached the summit – 714 metres high – in just over an hour and in beautifully clear – but incredibly windy – conditions. For a country that experiences rain 260 days a year, it seemed as if I had arrived on one of the good days. For at least the first few hours of my time on the island, the jacket and raincoat I’d packed were redundant.

They also briefly remained in my rucksack because, perhaps surprisingly given how far north it is, it doesn’t actually ever get that cold in the Faroe Islands – even at the height of winter. Whereas many of its Scandinavian cousins – Sweden, Norway and in particular Iceland – experience sub-zero temperatures regularly, the Faroes have a mild climate because of their positioning in the Gulf Stream. Mean temperatures in winter are around 3-4C, but it also means summers are cool – between 9.5-10.5C usually.

My first glimpse of a Faroese village was Dávabreyt – a tiny community located a short drive from the airport. It had a small beach with black, volcanic sand, and a waterfall running into the Sørvágsfjørður fjord.

Most of the handful of houses in the village had grass on their roofs, which Andrias explained was a natural form of insulation. It went some way to camouflaging them against the surrounding mountains. On some houses, the grass was overgrown; while on others, it was like a perfect rooftop bowling green. My first question to Andrias was, obviously, “How do they cut the grass?” Strimmers and scythes are the most popular methods, he said, but some people prefer to stick a couple of sheep up there to keep the grass trim.

As we moved on to begin scaling Eysturtindur, Andrias gave me a potted history of his country – from its Viking and, unexpectedly, Irish roots, through to its Danish control and eventual home rule. Now, 91% of the country’s 49,000 people are Faroese, with the rest made up of Danes, Brits, Greenlanders, Icelanders and a small minority of people of other ethnicities. Its main language is Faroese, which is similar to the Old Nordic language, but Danish is taught in schools to children aged eight and upwards. English is taught from nine and German from 13.

Although the Faroe Islands’ population increased 0.5% between 2012 and 2013, many of its residents are leaving the smaller communities and villages for larger settlements. Meanwhile, young people often move to Denmark to study and never return permanently.

But it’s certainly not the Faroe Islands’ lack of beauty that is sending them away. The entire country is steeped in splendour. Think the Lake District or the Scottish Highlands, with fewer roads and amenities and even fewer urbanisations (and almost no trees outside the major conurbations). Its lush green mountains, some of whose only inhabitants are sheep (which outnumber people 2:1), appear to stretch for miles. Yet everything is within reach.

The Faroese mountains – the highest of which is Slættaratindur, at 882 metres above sea level – appear to have been hand-crafted by the gods themselves. So it’s easy to understand why almost everyone in the country is religious (strangely, unlike some of its other Scandinavian cousins. Sweden, for example, has one of the highest proportions of atheists in the world at 34% of the population). The five peaks of Tindhólmur, a mountain on the south side of Sørvágsfjørður – named Ytsti, Arni, Lítli, Breidi and Bogdi (translated as Farthest, Eagle, Small, Broad and Bent, respectively) – almost resemble a giant hand reaching out to the heavens from the Earth.

Like many of his fellow countrymen and women, Andrias too is religious. He’s 34, and spent time in the US studying at Bible college, and also works in a hotel. He told me he was never completely sure about religion growing up, until one day, while out walking with a friend, he was all of a sudden stopped in his tracks and filled by “joy, peace and energy”. He saw this as a sign from God that instantly reaffirmed his faith.

The Faroe Islands are famous for their thriving seabird population – puffins, guillemots, eiders and starlings are common. Andrias said a handful of mountain hares (which villagers are allowed to shoot and eat in certain months) were introduced in the 1800s and there are now thousands across the country. Whaling is also popular in the country – though a somewhat contentious issue among environmentalists (I looked at whaling more detail later on in my trip, so stay tuned).

Andrias told me of a time he saw a walrus on the beach – an apparently rare sight in the country. It was getting dark, and he slowly edged nearer and nearer the creature in an effort to simply touch it. He did, and described it as one of the best moments of his life.

Perhaps the most famous creature local to the Faroe Islands, though, is the salmon. Salmon fishing makes up 95% of the country’s exports (the US, Andrias told me, is particularly fond of Faroese salmon) and contributes massively to the economy. It is also one of the things that the country is globally famous for.

Before a recent international football match with the Faroe Islands, Joachim Löw, the manager of the German national team, said, “I don’t know much about the Faroe Islands, but I do know that they have the best salmon in the world.” The Germans may have won 3-0 on the night – which many Faroese supporters hailed as a good result for the country – but at least the islanders can claim a victory in the fish stakes. 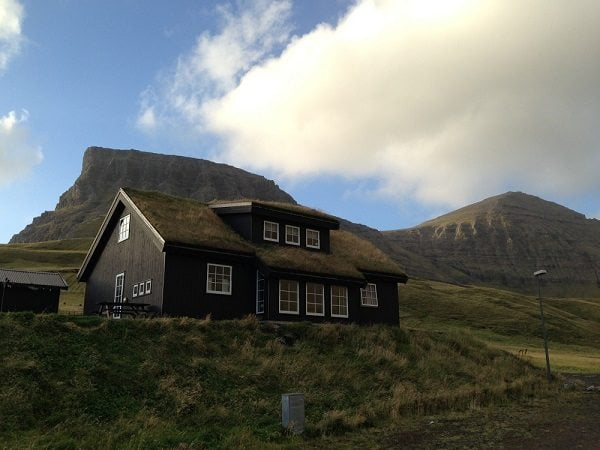 After saying my goodbyes to Andrias, I headed to Gjógv on the northern tip of Eysturoy island, where I would be staying the night. The 80km drive through the rolling Faroese mountains would have Jeremy Clarkson salivating. The humble automobile might have its critics in terms of its environmental impact, but its invention has connected regions of the Faroe Islands in ways that were once not possible.

Road tunnels have been constructed through mountains so that villages don’t have to brave the conditions to get something from the other side. Until the development of the tunnel between Gásadalur and nearby Bøur, the local postman had to walk the exact 3.5km route I walked with Andrias three times a week.

I arrived at the Gjáargarður guesthouse in Gjógv at around 8.30pm, and was greeted by a plate of locally-produced food – a range of breads, salad, meat and fish – and a thoroughly welcome local beer, brewed by Føroya Bjór.

I had only been in this incredible country for half a day, yet I had already forgotten what it was like to be in the hustle and bustle of a major city. The Land of Maybe had me at hello.

This is the first of four diary entries from Alex Blackburne’s recent trip to the Faroe Islands.