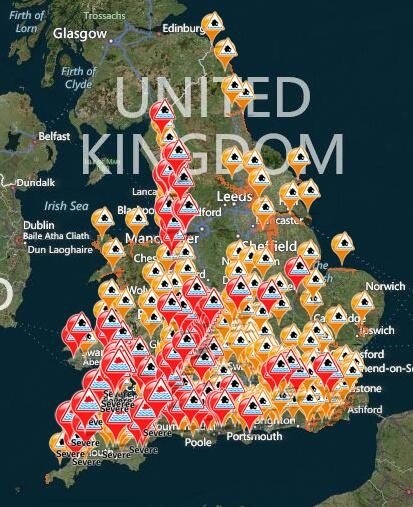 The Environment Agency has warned that severe weather poses a serious “danger to life” in some coastal areas, as extreme conditions continue to overwhelm the UK.

Strong winds continue to hit many parts of the coastline, with high tides meaning the threat to life is much more significant. Large waves began in the early hours of Friday morning.

A severe warning is the highest category of warning, and the Environment Agency said that the categorisation represents a significant threat to life and property at 12 coastal locations across the south-west, including many parts of Cornwall and Devon.

There have already been a number of incidents over the past few weeks where individuals have disappeared and feared to have been swept to sea. The Environment Agency warned people to stay away from shorelines.

Pete Fox, head of strategy at the Environment Agency, said, “We are expecting flooding along the west and south coasts of England and Wales, due to a combination of strong winds, large waves and high tides, from the early hours of Friday and into the weekend.

“Coastal paths and promenades could be highly dangerous as there is an increased risk of being swept out to sea. People are warned to stay away from the shoreline.”

It is also predicted that further rain across many other parts of the UK mean that rivers are still at risk of bursting their banks and saturated ground could lead to surface flooding.