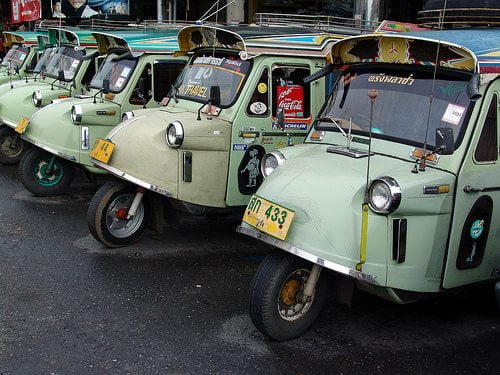 A team from Birmingham City University are preparing to unveil what they say could be the world’s first affordable hydrogen fuel cell mass transit vehicle.

The concept will be showcased at the Auto Expo Motor Show in India this week. It is designed to provide a sustainable replacement for the auto-rickshaw vehicle, known as the ‘Tuk Tuk’, which is widely used in Asia.

The designers of the Millenium Tuk-Tuk, as it is called, hope that it could eventually become a primary mode of public transport in India.

“With the current climate agenda of a low-carbon economy and the need to reduce greenhouse gas emissions and pollution, the way vehicles are reliant on fossil fuels needs to change”, said Parmjit Chima, head of the School of Engineering, Design and Manufacturing Systems.

Hydrogen-powered vehicles have long been championed as a potential holy grail of sustainable transport. Their environmental impact is minimal, even less than electric vehicles (EVs), as they emit only water vapour as exhaust.

The development of the technology has been slow, but motoring giants Honda and Toyota have both recently revealed plans to bring out hydrogen fuel cell powered cars and 2015 respectively. Hyundai is also releasing a fuel cell crossover in the spring.

“Today, the hydrogen fuel cell is no longer a research project; it is a meaningful choice”, Mike O’Brien, vice-president of product and corporate planning for Hyundai said last month.

However, due to a lack of infrastructure, we should not be expecting to see hydrogen-powered cars on every street any time soon. Equipping filling stations to dispense hydrogen will be a lengthy process, demanding much investment.

Critics also say that the production of hydrogen is an energy intensive process – meaning that any environmental benefits are mitigated if this energy is generated using fossil fuels.

A model of the Millennium Tuk-Tuk will be displayed at Birmingham City University in the summer.