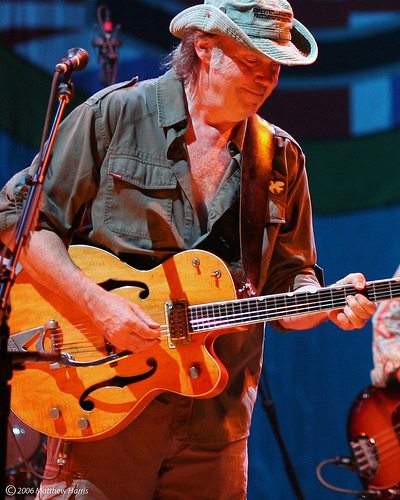 Canadian musician Neil Young has criticised his home country’s dash for tar sands oil, and launched a fundraising tour to support the indigenous groups who are against it.

Young said that Canada’s government was “completely out of control” when it came to the environment, as it gives absolute priority to profit. He said that sites where drilling for carbon-intensive tar sands oil takes places were the ugliest things he has ever seen.

“It’s the greediest, most destructive and most disrespectful demonstration of something that has run amok”, the singer added.

Young has started a tour called Honour the Treaties in support of First Nations indigenous groups that oppose oil expansion in Canada, both for environmental and health reasons.

Jason MacDonald, spokesperson for the prime minister’s office, said that Canada’s natural resources were fundamental to the country’s economy and in generating jobs.

He added, “Even the lifestyle of a rock star relies, to some degree, on the resources developed by thousands of hard-working Canadians every day.”

Replying to these claims, Young said, “If rock stars need oil is an official response, how does that affect the treaties [prime minister Stephen Harper’s] government of Canada is breaking?

“Of course, rock stars don’t need oil. I drove my electric car from California to the tar sands and on to Washington DC without using any oil at all and I’m a rock star. My car’s generator runs on biomass, one of several future fuels Canada should be developing for the post fossil fuel age.”

Young also said that he respected workers but there were better jobs in the clean energy sector.

“The quandary we face is the job they are working on. They are digging a hole that our grandchildren will have great trouble digging their way out of”, he said.

The country’s prime minister Harper has sent a report to the UN, admitting it expects carbon dioxide (CO2) emissions to rise by 38% by 2030 thanks mainly to the tar sands sector.