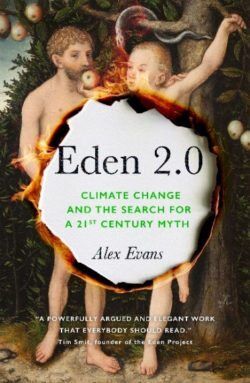 – Alex Evans is a leading authority on the politics of climate change. He spent fifteen years as an adviser on climate change in Tony Blair’s government, in the Secretary-General’s office at the United Nations, and for think tanks in the US, the UK and Ethiopia.–

– Summit after summit on climate change has either failed or resulted in empty promises. Evans argues that climate change is too big a problem for governments to fix. To get past national concerns we need to tap into the power of mass movements.

– This will involve rediscovering the power of deep stories that can inspire the whole of society – the kind of stories we call myths, which we’ve largely forgotten and now need more than ever. A profoundly hopeful and optimistic book that will transform how you think about climate change and our ability to fix it.

Alex Evans has worked with governments on climate change for fifteen years, first in the British Labour government and then at the very top levels of the United Nations. But he always found that when world leaders sit down to negotiate climate change action, national politics always leads to failure and lack of ambition. According to Evans, “If we’re to overcome an issue as enormous as climate change, then we need to look far beyond policymakers and pie charts. Instead, I’ve come to believe that we need to build the kind of mass movement that has in the past created the political space to end slavery, or create new civil rights, or secure the write-off of billions of dollars of third world debt.

“To do that, what we need most of all is stories. Stories that can inspire the whole of society to think and act differently. Stories that make sense of our past and point the way to a better future; stories that help us face what’s happening and show us how to restore what we’ve lost. We used to be rich in such stories, and we called them myths. Now we have largely forgotten them – and we need them more than ever.”

In Eden 2.0, Alex Evans gives us a blueprint for how we can find and use 21st century myths for the most important issue facing our world.

Concise, elegant, timely and far-reaching, Eden 2.0 is a profoundly hopeful and optimistic book that will transform how you think about climate change and our ability to fix it.

“A powerfully argued and elegant work that everybody should read.” Tim Smit, founder of the Eden Project

“This world has the potential to be a paradise for humanity but only if we change our world view. Eden 2.0 proposes another way of seeing and working.” Richard Chartres, Bishop of London

“Eden 2.0 gives us a glimpse of what campaigning could deliver if we focussed on binding people together based on shared ideas. It couldn’t be a more urgent task and we couldn’t have a clearer or more necessary handbook” Kirsty McNeill, director of policy and campaigns, Save the Children

Alex Evans is currently research director for the new Business Commission on Sustainable Development, exploring the role of business in delivering the UN’s 2030 Sustainable Development Goals on poverty, inequality, climate, and sustainability. He has also been a Senior Fellow at NYU’s Center on International Cooperation (CIC) since 2006.

He has been an expert on climate change in the UN Secretary-General’s office, where he was the writer for the 2011 UN High-level Panel on Global Sustainability, worked with the government of Ethiopia to help organize the 2015 Finance for Development summit in Addis Ababa and was a member of Ethiopia’s delegation to the COP21 climate summit, and has written reports on climate change for the Brookings Institution, Chatham House, and the Center for Global Development.

Prior to 2006 Evans was Special Adviser to two successive UK Secretaries of State for International Development (Hilary Benn and Valerie Amos), where he played a key role in liaising with the Make Poverty History campaign, and was part of the cross-Whitehall group that designed and delivered the 2005 G8 summit at Gleneagles.

Alex Evans has just moved back to London, where he was born.