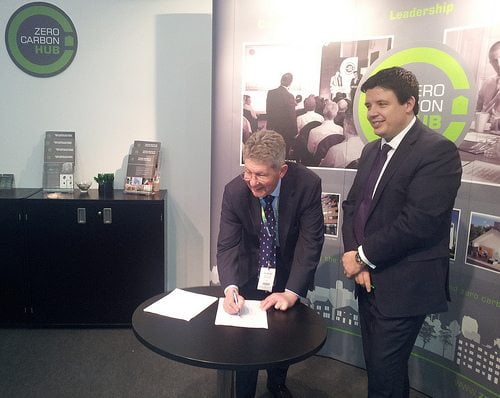 A government consultation on how to transition to zero-carbon homes has been welcomed by the UK Green Building Council (UKGBC).

The consultation, Next steps to zero carbon homes – Allowable Solutions, is being overseen by the Department for Communities and Local Government. It began on Tuesday and will end in mid-October.

It will look to recommend policies that will ensure a zero-carbon future for the residential sector.

In 2013, 25% of all carbon emissions in the UK came from residential properties, and the consultation says, “Government is committed to requiring all new homes from 2016 to meet the zero carbon standard.”

The initiatives will also be open to non-domestic buildings.

It adds that, working in conjunction with the green deal – the government’s flagship energy efficiency scheme – and energy companies, the consultation will allow the UK to move into a low-carbon economy.

The UKGBC, the industry organisation, has welcomed the consultation, saying that it was looking forward to responding.

“The proposals for how builders can meet the zero carbon 2016 target seem sensible, and build on the recommendations made by a UKGBC Task Group back in 2008, and extensive work since carried out by the industry through the Zero Carbon Hub”, said Paul King, CEO of UKGBC.

“We also welcome the proposal that Allowable Solutions should also be available for non-domestic buildings – something we’ve consistently called for.”