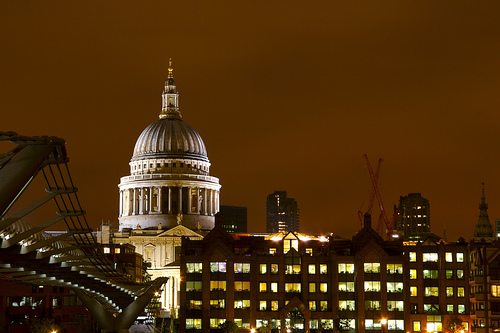 One of the defences in the Church of England’s clerical kerfuffle over its indirect seed funding of payday lender Wonga (APR 5,853%), was that investment managers have ‘fiduciary responsibility’. Since it’s someone else’s money, they must maximise financial returns. For those investing on behalf of a church, fiduciary responsibility cannot and should not trump moral or social responsibility.

Radio 4’s Today programme gave the archbishop of Canterbury Justin Welby an unusually fair hearing during the 8.10am slot on Friday. He was likeable, humble, apologetic and embarrassed. To be fair, the investment in question predates his tenure, so he can’t really be held responsible.

Having covered the Archbishop’s declaration that he would compete payday lenders out of business, we wanted to cover this turn of events in some depth.

On Friday we wrote about the story as it broke, interviewed the Ethical Investment Advisory Group of the Church of England and published a blog quoting the archbishop’s question, “Is a little sin tolerable?” – to which his clear answer was no.  He then went on to use the ‘it’s complicated’ defence.

Exodus 23:25 states, “If you lend money to any of my people with you who is poor, you shall not be like a moneylender to him, and you shall not exact interest from him.” So, that rules out investing in payday lenders. Saying the world “is complicated” is simply not a good enough response for a religious leader. It all seems a little pick-and-mix if you can so easily ignore the central text of your faith.

While the usual suspects of anti-sustainable and anti-ethical investment will use this relatively trivial event to knock the ethical sector, the whole debate has missed one point and highlighted another. It misses the point that the sector has evolved significantly from negative screening and its ethical past to positive selection and a sustainable future. It highlights a wider and more critical issue: transparency. Do any of us really know what we are investing in?

These two issues can be turned to the sustainable and ethical sector’s advantage.

Firstly, there is a great story to be told about the future of sustainable investment. This would be about clean energy and energy security, resource efficiency, reforestation, education, health, improved infrastructure and transport, leapfrog innovation, new green collar jobs and a valuable export opportunity for the most innovative and inventive of nations – the United Kingdom. The BBC asked, “Can investments ever be ethical?”, but this is the endlessly asked wrong question. We should be asking, “Why aren’t all investments sustainable?”

Secondly, very few people know what they’re investing in across their portfolio. This news story will probably make more people look a little closer. It is down to the sustainable and ethical investment sector to tell them and help them find the information.

The FTSE All-Share and All-World Indices are heavily dominated by financial institutions and oil and gas producers.

These are the organisations that have done, and are still doing, the greatest damage to the global economy and environment respectively. If you invest in anything other than the most selective of funds, you will be investing in these economy and environment-wreckers. This is degrading the world for your children, for the possibility, and it’s only a possibility, of a marginally higher profit today.

In the past, we have called for transparency, simplicity and honesty in investment, including real-time publishing of all fund holdings online. If this were the case, investors could make informed choices on what they wished to invest in, and a future archbishop might not be so embarrassed.

The sin stocks – tobacco, gambling, alcohol, pornography, arms and nuclear – represent a relatively small share of the equity markets. They still matter because they are riddled with dubious practices and create widespread human misery. However, focusing exclusively on them is a distraction to the existential threats of global economic instability, pollution, resource scarcity and climate change.

As Aldous Huxley exquisitely put it in his collected essays of 1959, Tomorrow and Tomorrow and Tomorrow, “We may not appreciate the fact; but a fact nevertheless it remains: we are living in a Golden Age, the most gilded Golden Age of human history—not only of past history, but of future history.  For, as Sir Charles Darwin and many others before him have pointed out, we are living like drunken sailors, like the irresponsible heirs of a millionaire uncle.

“At an ever-accelerating rate, we are now squandering the capital of metallic ores and fossil fuels accumulated in the Earth’s crust during hundreds of millions of years. How long can this spending spree go on? Estimates vary. But all are agreed that within a few centuries or at most a few millennia, man will have run through his capital and will be compelled to live, for the remaining nine thousand nine hundred and seventy or eighty centuries of his career as Homo sapiens, strictly on income.

“Sir Charles is of the opinion that man will successfully make the transition from rich ores to poor ores and even seawater, from coal, oil, uranium and thorium to solar energy and alcohol derived from plants. About as much energy as is now available can be derived from the new sources—but with a far greater expense in man hours, a much larger capital investment in machinery. And the same holds true of the raw materials on which industrial civilization depends. By doing a great deal more work than they are doing now, men will contrive to extract the diluted dregs of the planet’s metallic wealth or will fabricate non-metallic substitutes for the elements they have completely used up.

“In such an event, some human beings will still live fairly well, but not in the style to which we, the squanderers of planetary capital, are accustomed.”

Is extracting diluted dregs and squandering planetary capital what Jesus would have wanted?

In a 2011 blog entitled Jesus the Investment Banker, one commenter wrote, “I think Jesus would invest in companies that were successful too, but he probably measures success differently than we do. I don’t think he would invest in oil companies that destroy the environment and run indigenous peoples off their lands.

“Since Jesus loves people, he probably doesn’t want them to be destroyed for lack of knowledge so he would probably invest in education. Since he is going to heal all sickness and diseases, he would probably invest in healthcare. Since God told Noah to take two of every kind of animal into the ark so that they wouldn’t be wiped out by the flood he probably doesn’t want our business practices to cause those same animals to go extinct.

“He would probably have regulations (lots of them) to make sure the business is being done safely and clean and fairly.

Exactly, and quite brilliantly put.

We recognise that the church needs to make a return on its investment to pay pensions, maintain its many buildings and support its mission and message. That return should be made responsibly, not 75%, 90% or 97% responsibly.

If a church that claims moral authority, cannot be courageous, assume ethical leadership and be socially responsible with its investments, is has lost its right to be critical of anyone else who chooses not to. Worse still, it has aided the argument not to do so.