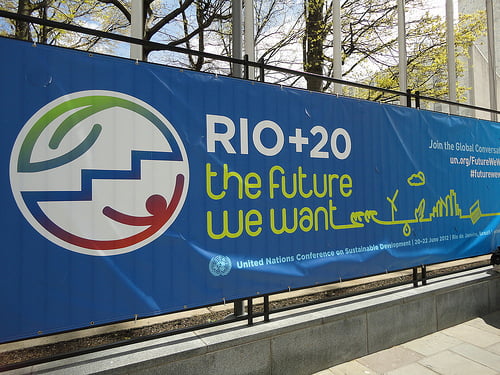 There are 40 days till Rio+20, and news on the United Nations Conference on Sustainable Development is pouring in. Blue & Green Tomorrow takes a look at the most important developments in the lead up to the conference and examines some of the biggest stories in the media.

Back in January, Rio+20 was proclaimed the “largest event in the history of the United Nations”. And, indeed, the long awaited milestone has also dominated the world of sustainability news and media, as well as leaving zero hotel vacancies in the city of Rio de Janeiro. But, with the event peeking over the horizon, will a storming plan of action be reached, or will the scrambling negotiations continue beyond June 22, 2012?

The end of April saw the Ministry of the Environment and the Ministry for Foreign Affairs host an international conference. The Stockholm+40 Partnership Forum for Sustainable Development was based on three main themes: sustainable innovations, sustainable productions and sustainable living.

On May 4, SustainAbility placed the global government under the microscope claiming: “The onus falls on the government to give us the systems, incentives and regulatory frameworks to enable sustainable development.” The company also features a series of videos on Guardian Sustainable Business, in which a number of successful pioneers speak out on the challenges that they face.

The third story that caught our attention this month, was Triple Pundit’s reiteration of the UN Global Compact and the World Business Council on Sustainable Development (WBCSD)’s coalition appeal to companies wanting to practise sustainability. The call was made on May 3 for the Rio+20 Corporate Sustainability Forum: “We need to put our world on a more sustainable path – economically, socially and environmentally,” said UN Secretary General Ban Ki-moon in a video address.

BusinessGreen also wrote about Ban Ki-moon’s video address in the run up to the Rio+20 Corporate Sustainability Forum, concluding with the recommendation of the Carbon Disclosure Project (CDP) as reporting framework for all signatory companies.

This week, we have witnessed a prominent struggle to finalise the approach to a sustainable future. On May 7, Global Issues reported the UN’s “failure” to reach a consensus on the Global Plan of Action titled  The Future We Want, after a fortnight of closed-door negotiations.

Many are also commenting on the “niggling” language in the “zero draft” document, which originally ran to more than 6,000 pages of submissions by member states, international organizations and civil society groups.

In an effort to “break the deadlock” the UN Preparatory Committee will be attempting once again to finalize the zero draft document when it holds an unscheduled five-day session beginning May 29.

Yesterday, our attention was drawn back to Stockholm when an international conference agreed on a set of 13 recommendations for governments, businesses, organisations and individuals to promote and contribute to sustainable development.

The agreement was reached among 42 ministers and deputy ministers, 35 international leaders from businesses and organisations, and around 700 stakeholders, which included young people, civil society organizations, researchers and businessmen from 72 countries who participated in the Stockholm+40 Partnership Forum for Sustainable Deveolpment back in April.

In contrast with SustainAbility’s assertion that Governmental action is mandatory for change, Eurasia Review wrote yesterday about the combined importance of partnerships involving businesses and non-governmental organisations, stating: “The United Nations Conference on Sustainable Development (Rio+20) in Rio de Janeiro provides world leaders and stakeholders with an opportunity to renew and reinforce their commitment to work together for a sustainable future for our planet and its present and future generations”.

B&GT’s roundup of recent coverage of Rio+20 development shows that the pressure is on to have as much of the document ready for June 20 as possible. With the remaining percentage to be discussed at the conference carrying such enormous weight, let us hope that we have passed the stage of language squabbling and are moving forward on a much more solid platform.