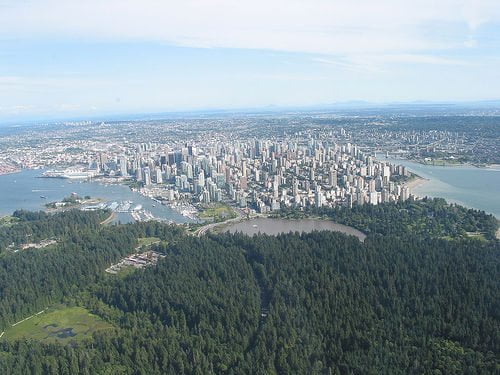 So far, this series has been unfairly Europe-centric. That will change today, because one city far from the continent has ruthless plans to become the greenest city in the world by 2020.

Vancouver, a coastal city in British Colombia, Canada, is a green city visionary. Its Greenest City 2020 Action Plan hopes to show that a city’s efforts to grow and prosper can go hand in hand with the addressing of climate change.

Canada’s eighth largest but most densely populated municipality grew from a small settlement established in the 1860s, named Gastown. Unfortunately for the narrative of this story, the moniker didn’t come from any local fossil fuel industry, but rather from “Gassy Jack”, a steamboat captain from Hull, England, who founded the region’s first saloon.

Nonetheless, Vancouver’s commitments to sustainability are impressive. The city has calculated that its current environmental footprint is three times what it should be, but is already well on the way to meeting its targets.

It hopes to bring all community-based greenhouse gas emissions down to 5% below 1990 levels, despite population growth of 27%. Vancouver’s vast renewable potential means over 90% of its energy consumption is already being drawn from local renewable sources

Though the city’s population and economy is on the rise, automobile usage is declining thanks to an expanding public transport system and updated cycling infrastructure.

The amount of waste shipping to landfill has been cut, air quality is increasing, and emissions from buildings are decreasing, as the city works towards the target of carbon neutrality for all developments constructed after the 2020 benchmark.

Vancouver is also introducing a pioneering Neighbourhood Energy Strategy, which connects buildings together to share a renewable source of heat.

One Neighbourhood Energy Utility is already up and running and in one year had cut emissions from South-East False Creek by 55%. Eight more utilities are currently being planned or developed. The city hopes that these systems will reduce greenhouse gas emissions in these neighbourhoods by up to 70% by 2020.

Whether or not Vancouver makes it to the 2020 top spot, there is no doubting that it is a frontrunner. In a country whose climate policy has veered well off-course, there is much that can be learned from Vancouver’s example.

“While national governments stall, cities are taking the lead in the fight against climate change”, mayor Gregor Robertson recently said.

“Our work together in Vancouver, from neighbourhood renewable energy to our smart, efficient building code is influencing other cities and making an important difference in the fight against climate change.”