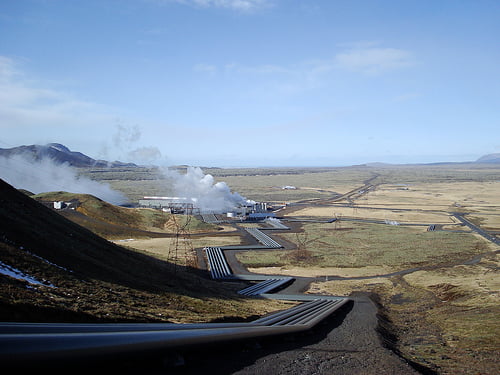 The UK and Iceland could soon be sharing geothermal energy sources, after the pair signed a memorandum of understanding to investigate opportunities for Icelandic volcanoes to supply power to the UK.

The agreement follows UK energy minister Charles Hendry’s visit to the Hellisheidi geothermal field earlier this week – the second biggest of its kind on the planet.

Hendry said, “[The] agreement will help pave the way for a closer relationship with Iceland, which I hope can yield significant benefits for the UK, including the development of geothermal power, greater use of interconnectors to transport energy under the sea, and developing oil and gas resources.

“This sort of approach can both enhance our energy security and deliver low-carbon electricity in an affordable way.”

The partnership comes after a report from engineering consultancy firm, Sinclair Knight Merz, which said that geothermal energy could supply up to 20% of the UK’s energy, and heat for millions of homes across the country.

Dr Ryan Law, chair of the Renewable Energy Association Deep Geothermal Group, wrote a preface for the report. He said, “We don’t want to be left out of a global industry which is estimated to be worth £30 billion by 2020.

“We could be at the forefront of this industry given the strength of British engineering skills. If the UK wants to seize a share of this booming global market we must prove our competence at home.

“Clearly investment at home could also go a long way to meeting our future energy needs cleanly and safely.”

The report picks out geothermal “hotspots” across the UK, including Cornwall, the Lake District, Lincolnshire, Northern Ireland and Scotland.

It’s estimated that the power source could provide 9.5 gigawatts (GW) of baseload electricity – the same as nine nuclear power stations – as well as over 100GW of heat.

With the so-called ‘golden age of gas’ that is apparently on the horizon, looking for alternative sources of energy is more important than ever. The potentially prosperous geothermal industry needs strong investment from government and energy suppliers, and as Eden Project managing director Tim Smit wrote in the report’s foreword, “For a small investment today we could be creating something that our grandchildren will thank us for.”

It’s our job to make sure we don’t miss this opportunity.

Energy down the drain: a new geothermal source