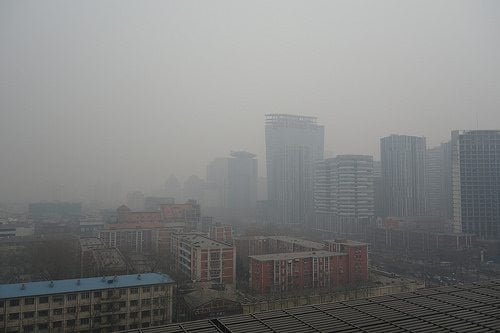 The Chinese government has published guidelines explaining how citizens can help curb the nation’s air pollution crisis, urging the public to walk more and drive less.

In April, a revision of China’s out-dated Environmental Protection Law made a legislated obligation for all citizens to protect the environment.

The amended law, which comes into action on January 1 2015, will also allow the Chinese authorities to levy stronger, daily fines on polluters, who may also be publicly named and shamed.

Cutting emissions from transportation is a priority, after a recent study of Beijing’s air quality found that 31% of the smog in the capital came from vehicles. Some 22% came from the burning of coal, while 18% came from polluting industries.

Many of China’s other major cities are also frequently choked by smog, forcing citizens to stay indoors while causing respiratory diseases and reducing life expectancy. China’s former health minister Chen Zhu has estimated that air pollution – the fourth biggest killer in Beijing – accounts for up to 500,000 premature deaths in China each year.

Alongside the new standards, the Chinese government has taken many steps to confront the crisis. The authorities recently announced that owners of new electric and hybrid vehicles would be exempted from purchase tax until the end of 2017.

The government is also trying to take old cars off the roads, while halting plans for new coal-fired power plants in favour of large investments in renewable energy.