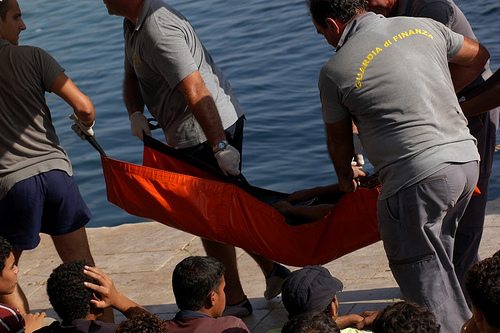 Human rights group Amnesty International has called on Italy and the rest of Europe to do more to prevent further loss of life, following the death of hundreds of people in a boat sinking off the island of Lampedusa. The region, it said, had become a “graveyard for migrants”.

Around 500 people, mostly from the Africa countries of Somalia and Eritrea, are believed to have been passengers on a boat. It sank after passengers started a fire in an effort to attract the attention of passing ships, which quickly spread to the rest of the vessel.

According to Italian authorities, there were at least three children and two pregnant women among the victims, who where escaping unsavoury regimes, poverty and starvation to join other members of their family in looking for a better life in Europe. Italian prime minister Enrico Letta called it “an immense tragedy”, while Pope Francis said it was a “disgrace”.

Amnesty International and Lampedusa mayor Giusi Nicolini have strongly criticised the attitude of the Italian and European governments. Nicolini invited Letta to “come and count the dead”, while asking for more support by the EU, as many migrants use the island as a door to Europe, trying to reach relatives across the continent.

In an appeal to the EU, Nicolini claimed, “How big should the graveyard of my island be? There is no room left.” He added that Europe should not leave the island alone, as the emergency is an European one – not just Italian.

Amnesty’s Europe and Central Asia deputy director Jezerca Tigani said, “The waters around the small island of Lampedusa have again tragically become a graveyard for migrants. These grim events keep repeating themselves as thousands of people make the perilous trip across the Mediterranean to seek protection or a better life.

“It is high time the Italian authorities and the EU increased their search-and-rescue capacity and co-operation in the Mediterranean Sea, rather than concentrating resources on closing off the borders. More must be done to prevent further loss of life in the future.”

For this reason, the migrants shipwrecked were not rescued by three fishing boats – despite having been seen and desperately calling for help.

In July, the pope visited Lampedusa, an island to the extreme south of Italy, close to Africa, where every year thousands of migrants from disadvantaged countries brave the seas in a bid to reach Europe. It’s expected that as the impacts of climate change worsen in the developing world, amplifying social unrest, more and more migrants will look to the continent salvation.

On Monday, another 13 migrants drowned their boat near Scicli, in Sicily. Since 1994, around 6,200 people lost their lives trying to cross the Sicilian Channel. What is left of their belongings – an address book, a cous cous packet and a toothbrush – is on show at the island’s Migration Museum .