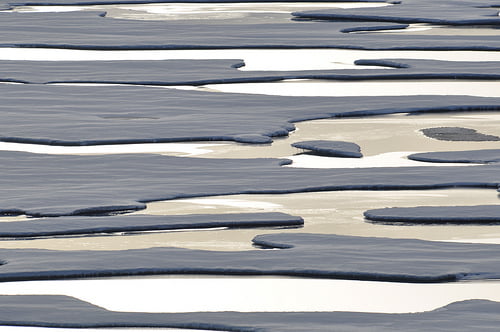 In the wake of the environmental audit committee’s Protecting the Arctic report, which called for more safety measures and higher safety standards to prevent oil spills, Joseph Iddison takes a look at Arctic sea ice and its growing vulnerability.

Over the last 30 years, the Arctic Circle has lost as much as three-quarters of its floating sea ice. This sea ice keeps the polar regions cool and helps moderate global climate. Sea ice has a bright surface: 80% of the sunlight that strikes it is reflected back into space. As sea ice melts in the summer, it exposes the dark ocean surface. Instead of reflecting the warm rays, the ocean absorbs 90% of the sunlight. The oceans heat up and Arctic temperatures rise even further.

A small temperature increase at the poles leads to still greater warming over time, making the poles the most sensitive regions to climate change on Earth. According to scientific measurements, both the thickness and extent of summer sea ice in the Arctic have shown a dramatic decline over the past 30 years. This is consistent with observations of a warming Arctic. The loss of sea ice also has the potential to accelerate global warming trends and to change climate patterns.

In addition, sea ice remains much thinner than in the past, and so is more vulnerable to further decline. While ice thickness is difficult to measure using satellites, a variety of data sources and estimates indicate that the Arctic ice cover remains alarmingly thin.

Indeed, in 2007, a record low measurement of 4.17m square kilometres was recorded. Whilst recovering slightly in recent years, Arctic sea ice has remained far below average, reaching near-record low ice extents in 2008 and 2011.

Unfortunately, this year has seen a new lowest reading, with the thickness unexpectedly plunging a further 500,000 sq km to less than 3.5m sq km, according to statistics from the National Snow and Ice Data Center in the US.

Professor Peter Wadhams of Cambridge University predicted the lows of 2007. He states that the primary concern of Arctic ice melt is the vicious cycle it impacts on the Earth’s climate.

“The main cause [of melting ice] is simply global warming: as the climate has warmed there has been less ice growth during the winter and more ice melt during the summer. As the sea ice retreats in summer the ocean warms up and this warms the seabed too. The main negative [of retreating sea ice] is an acceleration of global warming.”

One of the major contributors to thinning Arctic ice is increasing demand for fossil fuels; particularly oil. The Arctic Circle is one of the last regions on Earth to be explored for gas or oil and would present a challenge to any would-be producer due to its location.

Many private investors and institutions nevertheless desire access the Arctic, namely to install new oil frontiers – acquiring a potential 90 billion barrels of oil. In order to drill in the Arctic, oil companies and private investors melt floating ice with heated water. Whilst clearly a financial incentive, in modern times such an amount would only supply demand for roughly three years. And with the risk of spills, environmentalists argue that any quest for oil would be selfishly short-term.

The preservation of the Arctic sea ice is crucial, not just to those who inhabit the region, but for humanity in general. Waleed Abdalati, a chief scientist at NASA, believes that sea levels will rise by at least a metre in the next century due to Arctic ice melt. This would have a major impact on people across the world, both financially and physically.

“A trillion dollars in expense and loss of property – that’s huge. A metre of sea level; but more than that is the humanitarian impact.”

To tackle the melting Arctic is to tackle climate change itself. More investment in renewable energies, more investment in raising awareness of the consequences of not reducing your CO2 footprint; both, as well as others, are required in order to prevent further destruction of the Arctic sea ice.

Joseph Iddison is a student in his final year of an English degree at the University of Leicester. He intends to do a master’s in geographical information science and human geography. Outside of his academic studies, he loves the two Fs – Fulham FC and Roger Federer.