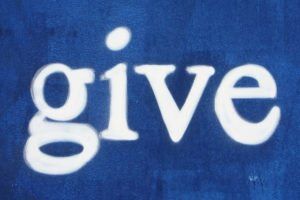 Today marks the rolling out of the 2016 plans from charity campaign #GivingTuesday with a call for everyone in the UK to ‘Do Good Stuff’.

#GivingTuesday, led in the UK by the Charities Aid Foundation (CAF), will take place on Tuesday 29th November this year, following the huge retail sales on Black Friday and Cyber Monday. The campaign offers an alternative to the shopping frenzy and encourages people to give back to people and causes they care about.

Last year #GivingTuesday broke a Guinness World Record for the most online donations in 24 hours, as people gave away £35million to good causes globally.

Online donations raised £6,000 a minute for UK charities with more than 1,400 charities and businesses connecting with the movement which reached hundreds of thousands of people.

Today the campaign reveals its new logo and launches a new call to action: Do Good Stuff.

The website now features inspiring profiles from people who have done brilliant things for charity, short films from famous vloggers on how to get involved, and dedicated sections for businesses and charities to explain how the campaign can work for them.

“The Charities Aid Foundation is really excited to be leading #GivingTuesday for a third year running.

#GivingTuesday is a huge celebration of doing good and a chance to shine a light on the fantastic work that charities do across the UK and around the world. It’s the collective action of thousands of people and organisations that makes this day so powerful.

“#GivingTuesday is a brilliant opportunity for charities – small and large – to make some noise and reach new audiences. It’s the perfect time to be creative, share ideas with others and try something different. We hope that on #GivingTuesday we can inspire people who wouldn’t otherwise donate or volunteer to do good stuff and be part of this growing global movement.”

In 2016 more charities and brands than ever are backing the day, including hundreds of local charities alongside household names such as Cancer Research UK, RSPCA, NSPCC and brands such as Sainsbury’s, BT, The Financial Times, Glamour and ASOS.

CAF brought #GivingTuesday to the UK two years ago. Last year it was the top trend on Twitter throughout the day, with more than 100,000 #GivingTuesday mentions – three times the number of mentions in 2014 (29,000).

#GivingTuesday now runs in over 70 countries around the world including the US, Canada, Germany, Spain, Singapore, Australia, Tanzania, Russia and Ireland.