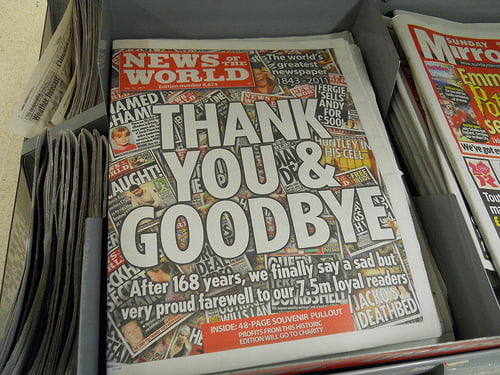 The Church of England’s investment arm has said that it wants to see senior executives held to account over the phone hacking scandal at The News of the World, despite having some £3.9m worth of shares in the now defunct title’s owner, News Corporation.

The Church Commissioners, which vows to use its influence to “promote ethical business practice”, called for a review of its investment in media mogul Rupert Murdoch’s organisation in its Annual Report, which was released last week.

The EIAG provide the Church of England national investing bodies with ethical investment advice, and acting on behalf of the Commissioners, the EIAG has announced the start of “board-level dialogue” with News Corporation.

Speaking on Monday, a spokesperson for the Church Commissioners said, “When the extent of malpractice at The News of the World became clear in July last year, the Ethical Investment Advisory Group said that it could not imagine circumstances in which it would be satisfied with any outcome that did not hold senior executives to account at News Corporation for the gross failures of management at the News of the World. We remain of this view.

“In line with our usual practice, we have sought to use our position as shareholders to ensure that our ethical concerns are addressed. We have been in private talks with independent directors on the company’s board since November. Clearly we need to see results.”

The Commissioner’s report also picks out its investment in BP as a priority for engagement. However, the oil giant promised that it is improving its “safety and operational risk management systems”, particularly in the wake of the Deepwater Horizon disaster.

Speaking to Blue & Green Tomorrow, Edward Mason, secretary at the EIAG, said, “We are extremely conscious of the ethical situation surrounding the News Corporation at the moment.

“As soon as everything really escalated and blew up, in July last year, we wrote a letter to Rupert Murdoch, followed by a statement expressing our very strong ethical concern about what is being uncovered and the need for this to be addressed by the company.

“As part of the process of setting up the dialogue, I attended News Corporation’s AGM last October, and made statements on the specific issues that we were concerned about.

“This was extremely important because, since then, we have established very serious dialogue with independent directors at the company.”

Mason reiterated the need for a true demonstration of progress on the part of the News Corporation. Rather than abandoning investment completely, he was keen to stress that the EIAG’s approach in times of ethical crisis is to allow time for the company to amend its practices on its own accord and prove its worth responsibly.

“It’s important to understand that ethical divestment is not the only option and engagement is a very important part of what we do in terms of being active and responsible. We have a good track record of achieving things through engagement.

“It’s not about making political statements; it’s about having a practical impact on the situation at hand.”

The action being taken by the Church Commissioners over the phone hacking scandal that has ripped through News Corporation in the last 10 months or so is proof that ethics are being taken into consideration when investing. Our recent Guide to Sustainable Investment delves even further into the subject.