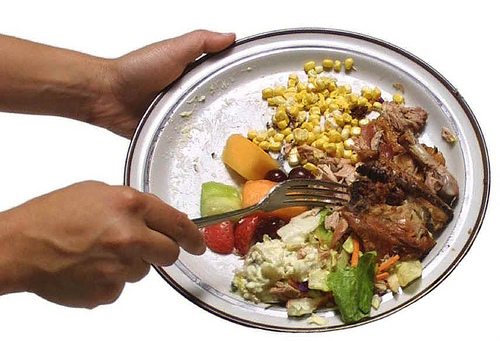 Avoidable food and drink waste in the UK has fallen by 21% since 2007, but households are still wasting 4.2 million tonnes of food every year, according to a new report.

Each British household has managed to save 60kg of food waste annually – an overall saving of £13 billion per year.

The best result in avoiding waste was achieved in homemade and ready meals, bakery, drink, fresh fruit, dairy and eggs.

However, there has been very little improvement in the waste of meat and fish, with people still throwing away the equivalent of 96 million chickens per year. Milk and bread are also among the things more often thrown in the bin.

Around 4.2 million tonnes of food and drinks – the equivalent of six meals per week per household – are thrown away annually, costing nearly £60 a month to each family. In term of environmental cost, this is equivalent to 17 million tonnes of CO2 and 19,000 sq/km of land used to produce the food.

Around 60% of the food that is thrown away could have been eaten, being for instance bread crust or vegetables’ peel.

Wrap director Liz Goodwin said, “Consumers are seriously worried about the cost of food and how it has increased over recent years. Yet as Wrap’s research shows, we are still wasting millions of tonnes and billions of pounds”.

Niki Charalampopoulou, policy and campaigns manager at Feeding 5000k campaign told Blue&Green Tomorrow that although there has been an improvement in reducing food waste, there is still a long way to go.

“Most food waste happens in the food industry, and here to we have the power to bring about the changes we need to see“, she said.

“The public needs to impress on supermarkets in particular that they can reduce waste in their businesses and in their supply chains, for example by redistributing to charities any fit for consumption surplus food, and relaxing cosmetic standards for fresh produce to help farmers sell their harvests rather than waste ugly fruit and vegetables“.

In September a report by the UK’s Global Food Security (GFS) revealed that up to 40% of edible food may be refused by supermarkets because it doesn’t satisfy aesthetic criteria.