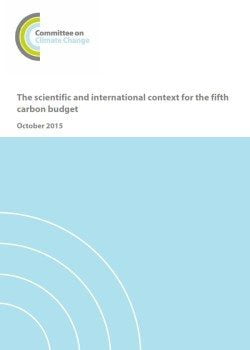 Under the Climate Change Act (2008), the Committee is required to advise the Government, by the end of 2015, on the level of the UK’s fifth carbon budget (the limit on the amount of greenhouse gases that can be emitted by the UK between 2028 and 2032).

The final advice on the fifth carbon budget must take into account other criteria in the Act, including: the impact of the budget on the economy, the government’s fiscal position, affordability of energy for households, security of supply, the devolved administrations and the competitiveness of businesses. The budget must also be on a path to the UK’s 2050 target of at least an 80% reduction in emissions below 1990 levels.

It makes the following points:

– It is clear that the climate is changing as a result of greenhouse gas emissions. Many impacts are already being detected across the world, from changes in extreme weather and ecosystems, to a slowdown in productivity gains for some key crops. Further emissions will lead to further warming and change.

– There is no simple threshold beyond which climate change moves from safe to dangerous. Some disruption and irreversible losses are expected at 2°C. Losses accelerate with warming, and very severe damage is expected in a world reaching 4°C.

– The EU and UK targets of at least an 80% reduction compared to 1990 remain an appropriate contribution to global action towards 2°C. The fifth carbon budget will need to be on a path to this target.

– Current pledges to the UN under the Paris process suggest that, globally, more is needed to limit the risk of going beyond 2°C.

– There is scope for this in future, given more is possible at low cost and the intention for Paris to include a mechanism to raise ambition. The UK Government has previously suggested a 50% reduction for the EU by 2030.

Following the publication of the Committee on Climate Change’s report today on the scientific and international context for the fifth carbon budget, the Aldersgate Group urged the UK government to continue its effort to cut carbon emissions and grow its low carbon economy amidst increasing international action on climate change.

Following an increase in ambition in the climate change policies of key emitting countries such as the US and China, the Aldersgate Group highlighted that international action to tackle climate change was strengthening despite the fact that current pledges to cut emissions were still insufficient to prevent dangerous levels of climate change.

Nick Molho, Executive Director of the Aldersgate Group said: “The upcoming Paris climate change summit won’t result in an agreement that can immediately lock-in commitments that will prevent dangerous levels of climate change. But the summit will be a success if it commits countries to initial emission cut pledges and provides for a mechanism to increase these pledges in the coming years.”

Nick Molho added: “To support this strengthening international action on climate change, the UK must continue its own efforts to cut carbon emissions at home. Concretely, this requires rapidly replacing a range of policies such as the levy control framework that will expire during the term of this Parliament and which are critical to increasing innovation and attracting investments in energy efficiency and low carbon power, heat and transport infrastructure.”

The Aldersgate Group also pointed out that in designing the UK’s future climate change and energy policies, the government should not lose sight of the economic opportunities presented by a transition to a low carbon economy.