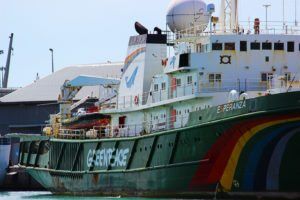 A long-awaited report written by the Climate Change Committee has finally been released, following accusations that it was being “sat on” to help the oil industry.

The report written by the Climate Change Committee says that fracking on a significant scale is not compatible with the UK’s climate change targets unless three key tests are met – on methane leaks, gas consumption and carbon budgets.

“The idea that fracking can be squared with the UK’s climate targets is based on a tower of assumptions, caveats, and conditions on which there is zero certainty of delivery. We know that the government is resisting putting in place policy and regulations needed so that fracking can pass the three climate tests that the Climate Committee is recommending. The problem with ramping up a whole new high-carbon infrastructure and the fossil fuel vested interests to go with it is that you can’t just dial it down later on if emissions start going through the roof. The government now faces a clear choice between promoting this climate-wrecking industry in the face of strong opposition or honour the Paris climate deal and back clean, home grown, reliable renewable energy and smart technologies instead.”

Richard Black, Director of the Energy and Climate Intelligence Unit (ECIU) said: “Energy Minister Andrea Leadsom confirmed this week that the government remains committed to the Climate Change Act and to cutting Britain’s emissions – and as this report makes clear, a willly-nilly approach to shale gas isn’t compatible with that commitment.

“Shale gas is not automatically a ‘low-carbon’ technology, as ministers and some in the business sometimes claim – it can result in a lowering of emissions, but that depends on two factors; leakage rates, and what it displaces in the energy mix.

“If the government intends to pursue shale gas responsibly, it needs to mandate a very tight cap on leakage and penalties for exceeding it, and make clear that shale gas will not displace truly low-carbon forms of energy such as nuclear power and renewables – otherwise it risks diverting Britain from the carbon reduction path to which the government is committed.”