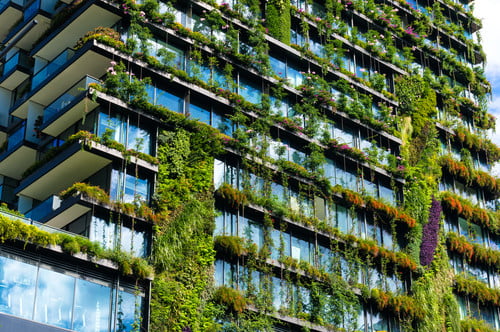 How Green Buildings Are Essential To Our Well-Being

The demand for green buildings has risen sharply in recent years. One study of 7,100 buildings found that 90% were improving energy efficiency by at least 10%.

The most obvious benefit of green buildings is that they help the environment. But there are other benefits as well that get less publicity.

What Are the Benefits of Green Buildings?

Green design is an architectural movement that has gained a lot of momentum in recent years. It has been growing steadily since the turn of the century.

The main focus is still largely on the environmental, which includes making structures as energy and water efficient as possible. However, there has been a new branch of the green building movement that has gained traction as of late. This new sustainability trend is known as the healthy building movement. It takes a holistic design approach that considers the construction of a building and its inhabitants as deeply intertwined.

Toyin-Ann Yerifor is a very well-educated architectural consultant with multiple degrees. She holds a Masters of Architecture from the University of East London, a Masters of Computer Science and Engineering from Université Grenoble Alpes, and a Masters of Business Administration from the University of Northampton. Throughout her career, she has been a fierce advocate for both green living and holistic architectural design. She believes that health and wellness should be an integral factor in any project. Yerifor’s work has centered on creating resilient architecture and she is constantly seeking new and innovative ways to design spaces that both promote health and wellness and minimize environmental impact. Over the years, she has gained much knowledge about the ways in which buildings can affect our well-being and which architectural design factors are most important when it comes to promoting human health.

It is worth noting that a building’s impact on one’s health is not just physical, but also mental. Poor ventilation, a lack of natural light, and humidity are all examples of factors relating to a space’s design that at best will foster low productivity and employee morale, and at worst can contribute to serious health issues. Below, Toyin-Ann Yerifor offers her insight into the steps that architects can take to create environmentally friendly, holistic buildings with human health and well-being as a top priority.

Visual comfort in the way of lighting is of the utmost important for building occupants. One of the most common complaints among workers is that a workspace is too dark, lacks natural light, or uses too many harsh fluorescent lights. Toyin-Ann Yerifor claims that as a result, there has been a renewed focus on maximizing natural light and using other illumination techniques like task lighting and dimmers. Design elements like large windows, skylights, glass doors and walls, open concept spaces, and lighter wall colours all serve to enhance natural light. Of course, the benefits of natural light are multifold. It not only saves energy, but produces happier, more creative employees. Task lighting and dimmers have also proven to be effective methods of increasing employee productivity. Meanwhile, there has been a trend towards developing lights to match the circadian rhythm. Research shows that blue light during the day best mimics natural daylight and so adding blue-enriched lights to an office space can increase productivity and lead to higher-quality sleep in the evening.

One of the best ways to promote environmental sustainability is to incorporate natural elements into a building design. This makes the building more energy efficient, because it can purify air and perform other functions with vegetation, rather than machines that suck energy.

Bringing the outdoor elements inside has unparalleled benefits for individuals, especially when it comes to mental health. Introducing natural elements to a space is called biophilia, a hypothesis popularized by Edward O. Wilson in 1984 that claims humans have an inherent desire to connect with other forms of life, such as nature. Toyin-Ann Yerifor asserts that some of the best examples of architectural biophilia include creating a living plant wall or choosing a building located near natural landscapes that can be highlighted by optimal window design. Bringing a touch of nature to a space can even be as simple as positioning planters beside desks.

Another new, more high-tech way of integrating nature into a building’s design is through biomimicry, otherwise known as basing a system or structure off of biological processes. Yerifor cites three major examples of this: an air conditioning system that imitates the air flow in termite mounds, paint that is resistant to dirt similar to the self-cleaning lotus leaf, and finally, powerful ceiling fans that are shaped like whale flippers.

It is no secret that most buildings today are vastly under-ventilated, says Toyin-Ann Yerifor. This makes them less energy efficient, which increases their carbon footprint. As Plymouth State University writes, good ventilation is essential for creating a green building with a small carbon footprint.

She further shares that rather than creating spaces with optimized ventilation, designers simply aim for the bare minimum, just enough ventilation to meet the requirement. Luckily, more and more research has been conducted on the correlation between air flow and cognitive function, with studies finding that when ventilation is significantly increased, a worker’s productivity significantly increases right along with it. Fewer sick days and higher productivity and efficiency were just a few of the positive benefits of optimal ventilation.

Thermal comfort, i.e. temperature and humidity, also majorly affect one’s health and well-being. Work environments that are stuffy, humid, and warm have been proven to stifle productivity, cause fatigue, and result in dry skin. How to combat this? Architectural Consultant Toyin-Ann Yerifor states that the key is in adapting the temperature to the design of the building and its occupants. For example, large, floor-to-ceiling windows have the ability to let in sunlight, making a space feel warmer, especially at certain times of day. Similarly, high ceilings can impact air flow and distribution.

The layout of the interior of the building is just as important as the exterior, if not more so. An optimally laid out space can actually promote physical health by encouraging employees to get active. In fact, Toyin-Ann Yerifor declares that stairs are making a comeback. What were once considered old-fashioned and out of vogue in office space design are now experiencing a resurgence as a proven method of increasing exercise. In 2010, the Active Design Guidelines were published with the idea of providing designers and architects with strategies for creating healthier buildings. One such strategy was incorporating stairs into a design in order to help tackle the obesity epidemic. Other strategies named to encourage active living at work included having communal garbage and recycling areas rather than garbage cans at each workspace and situating printers and water coolers together to encourage both physical and social stimulation.

Green Buildings Offer Benefits that Go Beyond the Environment

There are a number of benefits of the sustainability movement. They offer a lot of holistic benefits to take into consideration.