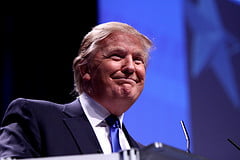 How on earth can US tycoon Donald Trump’s plans for a luxury golf course hinder progress in Scotland’s vibrant renewable energy sector?

The incensed reaction to the planned 11-turbine European Offshore Wind Deployment Centre in Aberdeen bay, came in the form of Trump’s open letter to Scottish First Minister, Alex Salmond, on February 9. Trump’s negativity is evident from the start of the letter with the business tycoon referring to the term wind farm in speech marks as if to suggest something surreal.

He then writes, “With the reckless installation of these monsters, you will single-handedly have done more damage to Scotland than virtually any event in Scottish history!”

The £150m offshore wind project, spearheaded by Swedish electricity company Vattenfall in a joint venture with engineering firm Technip and Aberdeen Renewable Energy Group, is actually a positive demonstration of Scotland’s capacity to propel forward its renewable revolution, with offshore wind energy at its core.

A Scottish Government spokeswoman, said, “Scottish waters are estimated to have as much as a quarter of Europe’s potential offshore wind energy.

“A recent study suggests that harnessing just a third of the practical resource off our coast by 2050 would enable us to generate enough electricity to power Scotland seven times over.”

With this resource potential, the development of Scotland’s offshore wind farm industry will be critical for meeting the SNP’s target of generating 100% gross annual electricity consumption from renewable energy by 2020.

Scotland will live up to its responsibilities to tackle climate change.

“This letter is a rather desperate attempt by a rich man who is used to getting his own way.”

On top of the drive to meet future climate change targets, offshore wind projects like this will attract inward investment and create job opportunities, catalysing further growth in the sector.

A Scottish government initiative steered by Skills Development Scotland (SDS), already funds 50% of staff training costs for organisations working in low carbon technologies. Called the Low Carbon Skills Fund, it supports the sustainability and growth of Scotland’s small businesses through up-skilling and re-skilling employees. Indeed, such sustainable funding ensures that the specific training and apprenticeships needed to keep up with the development of the offshore-renewable industry are already in place.

Clearly, this is a concept that Donald Trump doesn’t grasp. He overlooks the fact that collaborative efforts between the government, offshore wind industry leaders, key renewable agencies and specific college training, is key to the fundamental way in which Scotland’s economy and society are changing.

North East Scotland Labour MSP Lewis Macdonald accused the business tycoon of using bully-boy tactics stating, “Donald Trump needs to realise that simply because he is investing in one project, it does not give him a veto on any other project.

“The right choice for the north east [of Scotland] is to support the offshore renewables development – a crucially important industry for our part of Scotland.”

Niall Stuart, the chief executive of Scottish Renewables, said, “Who is Donald Trump to tell Scotland what is good for our economy and our environment? He completely overblows the impact of the proposed wind farm”.

The message from political leaders and pro-renewable energy groups in the country is clear. This emotionally charged outburst should not undermine Alex Salmond’s plans to drive on and meet Scotland’s future renewable energy targets.

If the wind farm gets the green light later this year, and Trump ends up pulling the plug on his £750m luxury golf resort, then perhaps he’ll grasp a sense of what it feels like to not always have things his own way. A feeling that would echo the frustration and devastation felt by long-standing residents of the Menie estate, who strongly opposed the Trump organisation’s invasion of their land by bulldozers and cash in the first place.

More can be learned about the news, events and planning in the Scottish offshore wind industry on the Offshore Wind Scotland website. If you are interested in how to generate renewable electricity, look at the Good Energy website – the UK’s only 100% renewable electricity supplier.