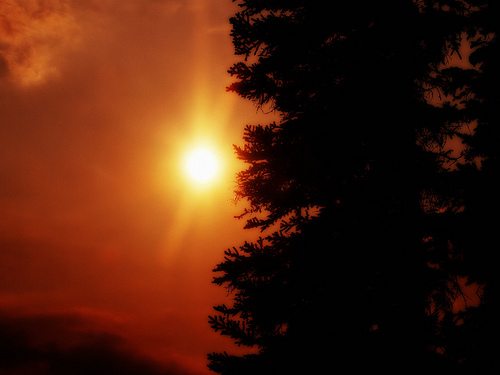 Pollution, waste, resource scarcity and price volatility, deforestation, polar ice loss, biodiversity loss, abuse of humans, corporate malpractice, loss of the wilds, the collapse in bee populations, and the tragedy of the commons.

First, it was global warming (1983) which all sounded rather pleasant on a cold, wet and windy island in the north Atlantic. Then it was climate change, which is a truism as the climate changes constantly. We then added anthropogenic (Greek: pertaining to man) to make the cause more specific and some people feel clever and others confused. What’s wrong with ‘human-caused’?

Most recently, we were told to “act on CO2” – forgetting methane, nitrous oxide and the many other pollutants and gases that poison the air we breathe and the land and sea that feeds us.

But CO2 is our friend isn’t it? Plants need it, don’t they? Most of us vaguely remember something from our school days to do with the carbon cycle and photosynthesis. Isn’t the planet greening?

Only 3% of GCSE exam sitters had studied chemistry in 2012, meaning 97% of the secondary school population only have a vague understanding of the science of CO2. Anecdotally, we are told that less than 1% of the population have a GCSE or equivalent in chemistry.

Cleantech is a horrible portmanteau (a combination of two words to create a new one), which sounds better as clean technology. Renewables is still a horrible neologism (new word – first cited 1971) when clean energy does what it says on the tin.

The campaign for plain English was founded in 1979 but the language of the climate debate remains abstract and complex. We need to connect the debate with real, often local effects and then appeal to common sense and reason.

The climate change science advocates clearly have a brand and message problem. We need to call the damage we are doing to the planet what it is.

– Pollution: costing billions in health and degrading the lives of millions

– Resource scarcity and price volatility: meaning future generations will be deprived of the resources they need and the economic security our nation’s wealth has historically secured

– Deforestation: global forest cover will dwindle to 10% of their 19th century extent by 2030, taking with them thousands of species and increasing floods and losing a valuable natural carbon capture system

– Polar ice loss: meaning more sun will be absorbed into the dark seas, accelerating global warming. And did we mention rising sea levels?

– Biodiversity loss: in 2006 the UN reported that human are responsible for the worst rates of extinction since the dinosaurs. The slaughter of species continues unabated

– Abuse of humans: impossible to justify but acceptable to most institutional investors, fund managers, financial advisers and private investors who want a percentage

– Corporate malpractice: endemic and systemic from straightforward criminality and corruption to all of the above

– Loss of the wilds: we increasingly live in urban spaces and use the wilds as our waste bin. Desertification, deforestation and climate change al mean we all live in a narrower and narrower hospitable zone

– Collapse in bee populations: the humble bumblebee has been providing a billion-pound service to humanity for free and in return we have continued to wage chemical warfare against it through the use of pesticides

– Tragedy of the commons: the thought that we are depleting a shared resource for personal profit, which harms the long-term interest of the group.

Let’s not talk about carbon dioxide, global warming and climate change, unless it’s in the context of our recent Guide to Climate Change: Investment & Divestment.

Instead, let’s talk about the potentially irreversible harm we are doing to our planet and each other, and the incredible opportunity, both moral and as an investment, of putting things right.