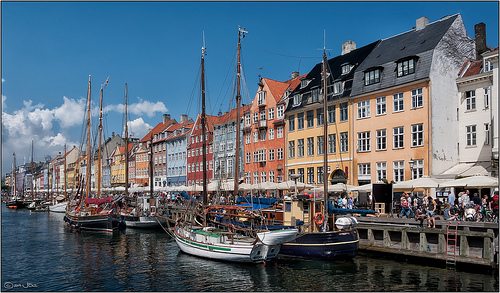 Copenhagen has an urban population of over 1.2 million. It is the capital of Denmark and the country’s most populous city. Selected as 2014’s winner of the European Green Capital award, it has been lauded as an example in municipal sustainability.

It is perhaps most famous for being one of the most bicycle-friendly centres in the world. Nearly one-third of its residents primarily using their bikes for their daily commute, and municipal policy (including the novel use of “karma cyclists” employed to hand out apples and good advice to morning traffic) aims to raise this proportion to 50% by 2015.

By 2025, the city wants 75% of all journeys to be made by foot, bike, or public transport. This will do far more than make for a less depressing rush hour – it is an essential factor in the city’s grand ambitions to be carbon neutral by 2025.

To achieve this, Copenhagen is also making great strides in reducing energy consumption, improving the energy efficiency of new buildings, and encouraging the use of renewables. Great progress has already been made, as the city reduced its emissions by 21% from 2005 to 2011.

Officials say that by the time 2025 comes around, direct city investment in the decarbonisation efforts will have reached around $472m (£287m), while private investors may have provided as much as $4.78 billion (£2.91 billion).

Not stopping there, however, Copenhagen’s city planners are already working to ready the capital for the challenges that future climate change will bring. Thanks to its position on the coast of Zealand, Copenhagen will be exposed to rising sea levels and increasingly frequent storms. Among the adaptation measures put forward by experts are convex streets, which would collect floodwater and direct it harmlessly to the harbour, and “pocket parks” to absorb the heat from unwelcome heatwaves.

The people of Copenhagen have also capitalised on the opportunities that preparing for the future brings. The city is working with companies, universities and other organisations to develop green growth, providing local jobs and sustainable employment. It is an approach that the jury of the European Green Capital award say all cities can learn from.

As Brain Vad Mathiesen, an associate professor of development and planning at Aalborg University, told the Guardian, “In Denmark, sustainable city planning is not a niche; it’s just what we do.”