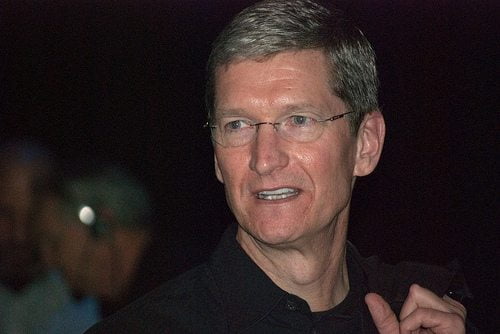 Apple chief executive Tim Cook has said that the company does not prioritise getting a return on investment over its consideration of environmental issues, telling attendees at an event hosted by a conservative thinktank to sell their shares in the firm if they didn’t agree.

Cook responded angrily to the National Centre for Public Policy Research (NCPPR), which claimed that investing in clean energy was not “profitable” and that Apple should give priority to making a profit.

He added that Apple often does things simply because they are the right things to do, and argued, “If you want me to do things only for ROI [return on investment] reasons, you should get out of this stock”.

He added, “When we work on making devices accessible to the blind, I don’t consider bloody ROI. We want to leave the world better than we found it.”

Apple has increased the share of renewable energy to power its buildings from 35% in 2010 to 75% in 2012 and has committed to reaching 100%. It also pledged to improve working conditions in Chinese factories where its devices are made, after it emerged that employees worked excessive hours.

The NCPPR had put forward a shareholder’s proposal, asking Apple to disclose the cost of its sustainability programmes and drop them if they were not profitable. The thinktank, founded in 1982,  describes the science behind climate change as a “myth”.

It replied to Cook with an even angrier statement, saying that Apple’s CEO cared more about global warming than about investors’ money.

“Mr Cook made it very clear to me that if I, or any other investor, was more concerned with return on investment than reducing carbon dioxide emissions, my investment is no longer welcome at Apple”, the NCPPR’s director Justin Danhof said.

Despite the organisation’s disappointment, however, Apple’s shareholders rejected the NCPPR’s proposal, which got less than 3% votes.