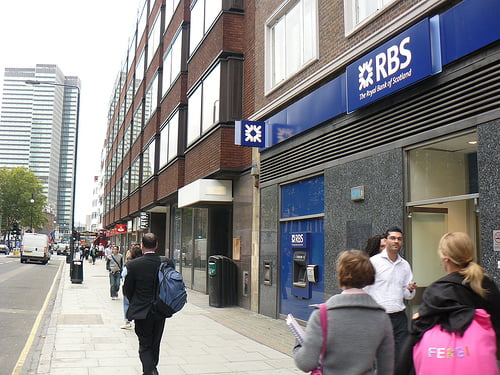 Fines of up to £500m in value are likely to be given to the Royal Bank of Scotland (RBS) as early as next week, as UK and US regulators look to make the bank pay for its role in the Libor rate-fixing scandal.

Compensation for the alleged illegal activity will mostly come from taxpayers, after the bank was bailed out for a sum of around £45.5 billion during the financial crisis in 2008.

RBS is the third major financial institution to be charged over Libor fixing, and its expected penalty is higher than the £276m fine handed out to Barclays in 2012, but less than the £940m that Swiss bank UBS was ordered to pay a month ago.

It was claimed last week that a significant portion of the RBS fine would be paid using last year’s investment banking bonus pool. As much as four-fifths of the total charge will be paid to US regulators, according to The Independent.

Another high street name, HSBC, received a £1.2 billion fine in December – the largest penalty ever given to a bank – over claims it had been laundering money for Mexican drug barons and Iranian criminals.

Although it hasn’t been handed a Libor charge yet, HSBC was one of seven banks that US regulators began investigating in August last year – along with Citigroup, Deutsche Bank, JP Morgan and the three already in negotiations.

If you are tired of culture and ethics of the major banking groups, read our Guide to Sustainable Banking 2012 to explore the alternatives.