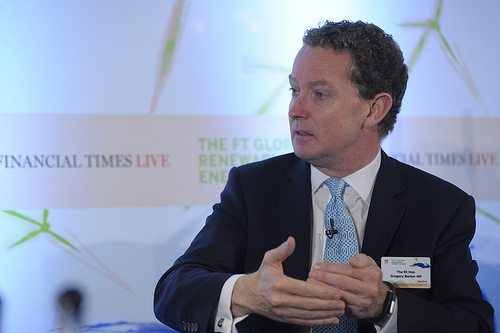 Ex- minister for energy and climate change Greg Barker has become a trustee of the Climate Group – an international organisation focused on making businesses aware of low-carbon opportunity to fight climate change.

Barker served under the last conservative government but stepped down in 2014 following cabinet reshuffle and said he would not be standing in the 2015 election.

Among Barker’s greatest achievements were the creation of the Green Investment Bank (GIB), the renewable heat incentive and the support for large solar energy projects.

He has now joined the Climate Group’s board of trustees, with the aim to help the organisation with its mission to spark a clean revolution among corporations.

Barker said, “The Climate Group is the recognised go-to organisation for government and business leaders on climate change. I hope to help The Climate Group build on its excellent track record of convening world leaders, and communicating the economic and business benefits of innovation and investment in the low carbon economy.

Barker added he will support the Climate Group in a range of initiatives, such as helping businesses to move to 100% renewable energy.

Mark Kenber, the Climate Group’s CEO said he hopes that Barker’s experience in the government will help the group to effectively communicate with institutions about the need for a low-carbon shift.

“He will support our continuing work to engage leaders and drive political ambition at the highest levels. He will also be key to helping us engage key policy-makers in areas where there are the great opportunities for technology scale-up, such as LED lighting, off-grid energy and corporate energy efficiency”, Kenber said.

Speaking to Blue&Green Tomorrow last year Barker also said that the UK is incredibly attractive for those wanting to invest in renewable energy – something the new government has been urged to take into account before deciding to penalise renewables.