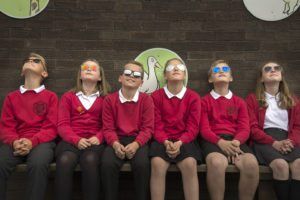 Sunshine At Schools in Salford With New Energy Scheme

A Partington community centre as well as three schools in Salford and are to be fitted with solar PV panels after a community share offer reached its fundraising target.

The sites will benefit from lower electricity bills as a result of the clean energy being generated from their rooftops.

The environmentally friendly scheme expects to save 50 tonnes of carbon emissions in the first year alone.

A total of £186k was needed to fund the scheme, which was raised through a community share offer. Members were invited to invest in the scheme from as little as £100.

Any profits from the generation of electricity will be ploughed back into a community fund, which is then used to support eco-friendly projects.

The sites will also be used to teach young people about climate change and the benefits of renewable energy and energy efficiency.

The scheme is run by volunteers who have set up community benefit societies – Greater Manchester Community Renewables (GMCR) and Moss Community Energy.

They received grants to develop the project from Department of Energy and Climate Change’s Urban Community Energy Fund and Unicorn Grocery, based in Chorlton, Manchester.

This is a fantastic achievement. We would like to thank everyone who has supported us to get to this point. We were oversubscribed with share applications, which is incredible.

“If people are interested in supporting community energy then there are a number of schemes across Greater Manchester that are currently looking for investment.”

NPS Solar, based in Oldham, are contracted to carry out the work. Ben Nuttall from NPs said: “NPS Solar is proud to have won the contract to work on this community energy project.

Not only will installing solar panels generate more green electricity, it will also generate awareness of the benefits of renewable energy within the local community.

“We are pleased that this project is not just about saving money, but also about helping the next generation see renewables as part of everyday life.”

Find out more about Greater Manchester Community Energy Pledge at :

Community Energy GM is made up of 18 organisations including Deeplish Community Centre in Rochdale, Hulme Community Garden Centre and Disability Stockport. They are all raising funds to install solar panels, which will cut carbon, boost budgets and benefit local residents.

Oldham Community Power is working with Oldham Council to install solar panels on the roofs of schools and community centres. Their mission is to ensure that Oldham’s young people have the opportunity to get involved in the renewable energy sector. Oldham Community Power is also working with the Government on a new community energy apprenticeship standard.

Moss Community Energy has been fundraising to install solar panels on Fiddlers Lane Primary School in Irlam. It aims to install renewable energy in Salford, which will generate an income to work for community benefit and education and to support people in fuel poverty to control energy production and usage

Greater Manchester Community Renewables launched a share issue to fund the installation of solar panels on three primary schools – Primrose Hill in Ordsall, Irlam Primary and Fiddlers Lane (in partnership with Moss Community Energy) – and The Fuse, a community hub in Partington. As well as saving money on their bills and reducing carbon emissions, GMCR will also provide its partners with educational support, and surpluses will be used to fund eco-friendly projects in the local area.

St John’s Sunshine is a voluntary community group in Old Trafford, which is harnessing the energy generated from the sun for the benefit of the community. Having installed solar panels on the roof of the church the profits generated from the Feed in Tariff are then used for community projects.

Bury Community Hydro is a team of four environmental activists from the Bury area who have come together to build an Archimedes screw turbine on the River Irwell at Chamberhall. The hydro plant will be community owned and run, and will supply clean, renewable electricity to local emergency services headquarters. The co-op already has over 30 Pioneer members and will be launching its main share issue over the coming months.

Biomass Energy Co-op is looking for members to support a project, which will achieve exciting advances in a new green technology for the UK market. With your help, BEC plans to provide biomass energy solutions that promote the sustainable use of waste products for heat and micro-power generation.