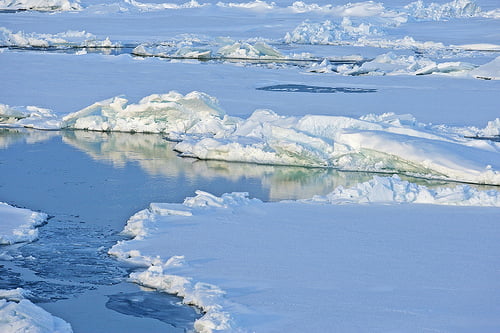 Rapid ice melt in the Arctic has forced a Russian crew to evacuate their research station, according to the country’s natural resources and environment ministry.

North Pole 40 is what’s called a drifting station, in that it floats naturally on top of the ice floe. But its 16 staff have been ordered to abandon their posts because the ice was beginning to melt.

Research by the National Snow and Ice Data Centre in the US last year said that sea ice in the Arctic had reached its lowest ever level since satellite observations began in 1979. It claimed that just 1.58m square miles was covered by ice – 27,000 square miles less than the previous record, set in September 2007.

Further research by NASA and the European Space Agency concluded that the remaining ice declined 36% in volume between 2003 and 2012.

The Russians have sent in an excavator to collect the stranded researchers from the station. Vladimir Sokolov of the Arctic and Antarctic Research Institute in Saint Petersburg attributed the rapid loss to climate change.

“This has made the Arctic research significantly harder – the ice has become thinner and the weather conditions more difficult”, he told Agence France-Presse.

“The Arctic Ocean, just like the Antarctic, is the refrigerator of the Earth. It significantly affects the climate of our planet.

“If this refrigerator has a glitch and we do not know about it, it leads to mistakes in forecasts and affects the quality of decision-making on entire territories.”

Russia, which is one of only eight members of the Arctic Council, has a long history of Arctic research and exploration, having set up over 40 drifting stations since 1937. North Pole 40 begun operation in October 2012 following the closure of North Pole 39 the previous month.

Oil giants including BP and Exxon Mobil were this week accused of playing ‘Russian roulette’ with investors’ money because of their links with poor performing Russian energy firms that were drilling in the Arctic.