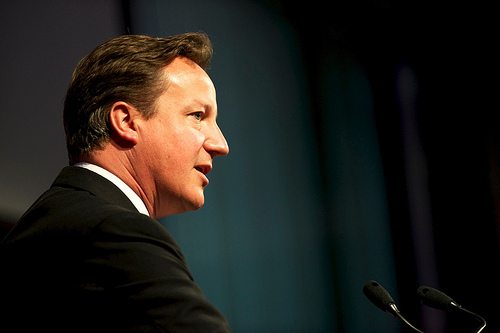 Manmade climate change is one of the greatest threats to humanity, David Cameron said during prime minister’s questions on Wednesday, after he was grilled over climate deniers in his party.

After opening the questioning on the subject of flooding, the leader of the opposition Ed Miliband accused Cameron of being “desperate to get off the subject” of climate change and suggested he was unwilling to take action.

Cameron replied, “I believe manmade climate change is one of the most serious threats that this country and this world faces. That is why we have the world’s first Green Investment Bank here in Britain.

“That is why, unlike 13 wasted years of Labour, we are building the first nuclear power station for 30 years in our country. That is why we have cut carbon emissions emitted by the government by 14% since we came to office.

“That is why we have set out, year after year, carbon budgets in this country. They talk a good game about it but it actually takes people to come in, govern effectively and deal with it.”

Agreeing with Cameron on the importance of the issue, the Labour leader then quoted the environment secretary Owen Paterson and energy minister Michael Fallon, who have both questioned climate science, asking Cameron, “Is he happy to have climate change deniers in his government?”

The prime minister evaded the question, instead saying, “This government has a solid track record of cutting carbon, of negotiating internationally, of investing in nuclear, the biggest renewable energy programme we have seen in our country’s history.”

Miliband responded, “The whole country will have heard he cannot answer the question about whether you need to believe in man made climate change to be part of his government. It used to be the thing he claimed was his passion above all else.”

“If we’re going to properly protect the British people we cannot have doubt in the government. Get real on climate change.”

Cameron’s comments came on the same day as a report by the Conservative Environment Network called on conservatives to embrace the green agenda.

Arnold Schwarzenegger and Michael Bloomberg are among 14 influential centre-right figures to have contributed to the pamphlet, which aims to “reinvigorate” the right’s desire to conserve the environment.