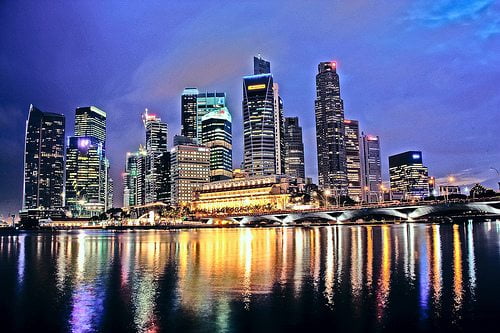 The cities of tomorrow can learn from the example of Singapore by embracing density in order to be more resource efficient, says a new report.

The report is the first in a series of publications to be born of a research collaboration between energy giant Shell and the Centre for Liveable Cities (CLC), which is based in Singapore.

It describes how when Singapore gained independence in 1965, it took progressive steps in urban planning, housing and transportation which allowed the city-state room to plan for its long-term development.

As building outwards was not an option, the city planners built inwards. Despite residents’ preferences for open spaces, the report says, this is the ideal way for a city to develop, as it allows more integrated infrastructure – such as combined heat and power generation facilities – and effective public transport.

“Urbanisation is one of the great social phenomena of our age,” said Jeremy Bentham, Shell’s vice-president of Global Business Environment.

“How cities around the world develop in coming decades will determine how efficiently we use vital resources – particularly energy, food and water – and directly impact the quality of life for billions of future urban citizens.”

The report says that the lessons to be learnt from examples like Singapore could be especially valuable to China, where over half of the 130 largest cities are still in the early stages of their development.

By 2030, an extra 350 million Chinese are expected to live in urban areas, taking the total to almost one billion.

The report argues that by increasing the density of development in some of the smaller newer Chinese cities to resemble London and France, energy use and carbon emissions could be greatly reduced.

“While every city is different, some guiding principles of ideal development exist, such as increasing compactness and more efficient integration of transport, power and heating systems,” said Bentham.

“For example, our research shows that compact city design can typically reduce average car use nationally by as much as 2,000 kilometres per person annually compared to countries with low density development common in many parts of the world today.”

The report also argues that increasing density does not mean sacrificing quality of living, citing London as an example of this. The authors even suggest that as finite natural resources run out, city density and the resource efficiency that comes with it may be seen as an attractive feature of city living.

By 2050, the number of people living in cities around the world is expected to increase from 3.6 billion to 6.2 billion – almost three-quarters of the projected population.