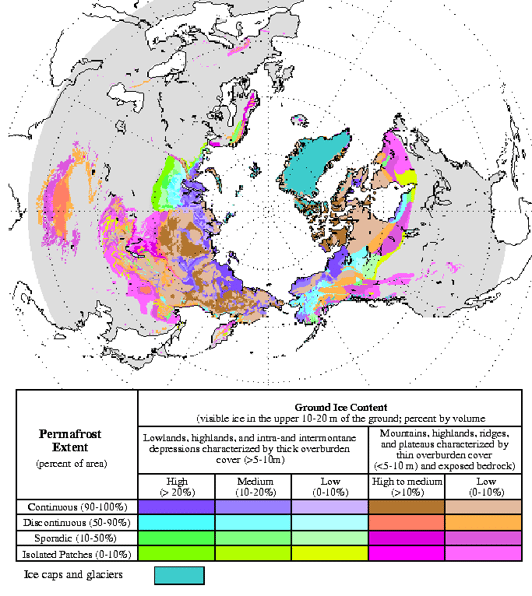 A world leading expert on permafrost has said permafrost in parts of Alaska will probably start to thaw by 2070, accelerating climate change through released methane.

In geology, permafrost or cryotic soil is soil at or below the freezing point of water 0 °C (32 °F) for two or more years. Most permafrost is located in high latitudes (in and around the Arctic and Antarctic regions).

Prof. Vladimir Romanovsky at the University of Alaska and the monitoring organization Global Terrestrial Network for Permafrost said that in the northern part of Alaska, permafrost has been warming by about one-tenth of a degree Celsius every year since the mid-2000s. “When we started measurements it was -8C, but now it’s coming to almost -2.5 on the Arctic coast,” he told BBC News. “It is unbelievable — that’s the temperature we should have here in central Alaska around Fairbanks but not there.”

“Permafrost won’t start to thaw there in 20 years, because the latest rate of warming is too high and will bounce back, but if you look at the whole record it seems it will definitely start to thaw by 2070-80, and nobody was talking about that before,” he told BBC News. “It was assumed it would be stable for this century but it seems that’s not true any more.”

Prof. Ted Schuur of Northern Arizona University told BBC News that the record wildfires in Alaska over the summer helped speed up the thaw, as the permafrost was exposed to warmer air. “Even if we stopped all emissions today, the Arctic has momentum where there is going to be more warming, more permafrost degradation, and some carbon coming out already — we have started the ball rolling in some senses,” he said. “It is probably not triggering a runaway climate effect but it adds to our problem. It accelerates the problem of climate change. To me that is worrisome because it makes the problem harder.”